A retired music theorist, who has been playing piano and typing since 1960, has drafted up a preliminary model of a computer keyboard layout, which he believes will enable most people to type at least 100 wpm, and will see the world’s fastest typists racing at 200 wpm or higher.  Over the last few years, Joseph M. Krush, Ph. D. was authoring a book on Music Theory and Composition, and using a lot of Mathematical Set Theory in the process.  “It occurred to me,” says Krush, “that if I used Set Theory in a similar way, then I could come up with a preliminary model of a computer keyboard, which would be far superior to the 138-year-old QWERTY layout, which is being used by almost all computer users to this day.”

Krush’s keyboard consists of four new features.  Most important, it uses a 12×3 layout, in which the 12 most commonly used letters lay in the home row, and the next 12 lay in the row above, so that 99.8% of typing is done in these two rows.  He also introduces a Double Shift Key, located where the spacebar is now.  “This key has enabled me to eliminate the entire top row of the current keyboard by placing the digits, and their shift position symbols, in the home row, and in the row above, respectively,” says Krush.

Krush’s keyboard is to be optimized not just for speed, but for comfort as well.  The people who will benefit the most from this keyboard, according to Krush, are those who suffer from carpal tunnel syndrome or arthritis in their hands or fingers.  The keyboard is currently being perfected by computer scientists in Europe, with whom Krush has established a working relationship.  The provisional patent application has been filed.

Krush is not seeking to be paid for his time or work, and neither are the European computer geniuses who are collaborating in the project.  But they do need funding for the complete patent application, building of the prototype, and building of the first 50-100 keyboards for user testing and feedback.  For those readers who are interested in more detailed information, please go to the website www.fundageek.com and look up The Krush 200 wpm Computer Keyboard Project. 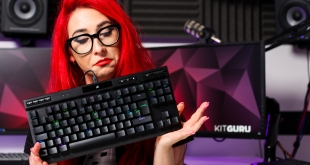 Want a new TKL keyboard that doesn't skimp on features?