Razer is well known for its headsets at this point, we've even reviewed a good number of Kraken series headsets ourselves over the years. This week, Razer is introducing a new flagship Kraken Ultimate to the lineup, swapping out standard 7.1 virtual surround sound for THX Spatial Audio.

The ear cups contain custom-tuned 50mm drivers with a more natural sound curve to give a better competitive edge while gaming. Soundscapes and auditory detail are reproduced faithfully and paired with THX Spatial Audio, users should be able to pick up on small nuances in sound and have an easier time of pinpointing distant gun shots or enemy foot steps. According to Razer, this is achieved by emulating a full 360 degree sound sphere for greater positional accuracy over 7.1 virtual surround sound. This method of spatial audio is also said to reduce ear fatigue by properly reproducing audio sources based on in-game distance. 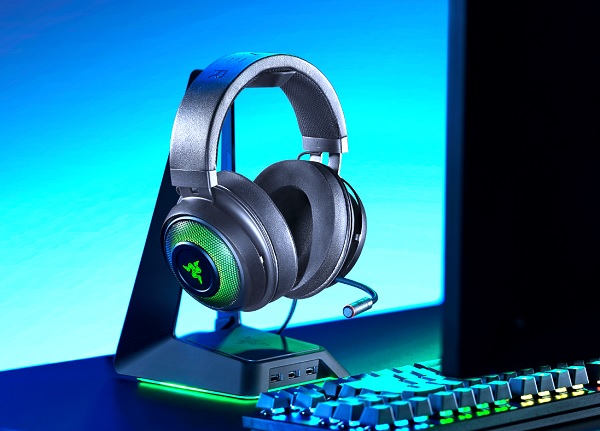 As with any gaming headset, the microphone is also an important part of the package. The Razer Kraken Ultimate has a retractable microphone with ‘pro-grade' active noise cancellation and Discord-certification, which should deliver “flawless team communication, even at crowded tournaments”.

Finally, the Kraken Ultimate comes with leather ear cushions infused with cooling gel to avoid hot, sweaty ears during longer gaming sessions. The headset weighs 275g in total, so it shouldn't feel heavy on your head during use. As you would expect, the headset does have Chroma RGB lighting and connects to PCs via USB.

KitGuru Says: I currently use the Dolby Atmos spatial audio plugin on Windows but I'd be very interested in seeing how THX Spatial Audio stacks up. Are any of you currently in the market for a new gaming headset? What do you think of the Kraken Ultimate?