Sony have announced their upcoming 3D video viewer headsets. The Sony HMZ-T3 has improved image quality over the previous version, although the display resolution is the same. Sony have reduced the weight a little to cause less strain on the head, with a more comfortable fitting. There are also wireless capabilities which sounds useful.

The headset measures 189 x 148 x 270 mm and weighs 320g. There is an adjustable cushioned head pad which will help raise comfort levels and Sony have built in six stages of independent lens adjustment. The device is set to warn users if they are watching for more than three hours at a time.

Sony promise high definition video viewing without a bunch of cables getting tangled around your head and neck. One cable will have to be connected however to a lithium battery pack for it to operate at all. The battery box can wirelessly connect over a range of 7 meters – enough for most living room or bedroom environments.

The media devices playing the files are connected to the processor unit via one of three HDMI inputs or one HDMI output. The battery box can connect to a smartphone or tablet via an MHL or HDMI port. Battery life is rated at three hours of wireless playback or seven hours cabled.

The headset has two 1280×720 OLED screens inside which the company claim is similar to viewing a 62.5 foot screen from 20 meters away. They are capable of 24p playback as well.

Sony allow the user to reduce the image size down by four steps to a low of 70 percent. A 2D image can be displayed with a slight virtual curve and gamers are supported with four image adjustment modes to increase visibility in darker areas of the screen. Ambient light shields help isolate the end user from the outside world, with a little gap at the bottom so you can see what is going on in the outside world.

The HMZ-T3W has virtual surround technology built into the headset to help immerse the user in 360 degree sound. There is a 32 bit DAC onboard which can handle 7:1 surround audio via the built in 16mm drivers. These offer 4hz to 27khz playback with 106dBa sensitivity.

More information over on the Sony page here.

Kitguru says: These look pretty much state of the art, but they won’t be cheap. 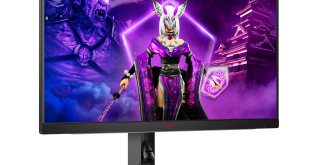