This display’s two big headline image quality features are its high contrast ratio and high colour gamut, and the moment you turn this thing on, both are immediately visible.

There’s a real depth and dynamism to the image thanks to deep, dark blacks sitting right alongside bright whites. Meanwhile colours really pop. Bright reds and greens in particular leap from the screen. 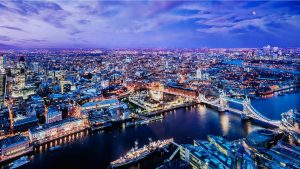 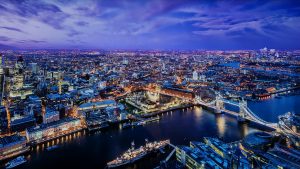 The latter point works both for and against this screen as for some things the extra colour vibrancy can really bring an image to life. For any games, images or videos that err on the side of looking vibrant or fantastical, the colour here only adds to that. However, if you’re looking at images that are familiar and that focus on realism, the oversaturated colours can make them look wrong. The most obvious example is caucasian skin tones, which can look far more red and blotchy than they would in real life.

Meanwhile, if you regularly edit images and video, the extended colour range – and to an extent the high contrast too – mean this display isn’t ideal. If you were to edit an image so that it looks good on this screen, there’s a strong chance it would look dull on most other screens. MSI really should’ve added an option to tone down the overzealous colours.

Moving onto other aspects of the display’s image, also clearly visible straight away are the good viewing angles the VA LCD panel provides. There is a slight shift in the black level response depending on your vertical viewing angle but by and large the image looks consistent from most angles. 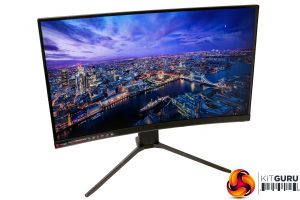 Overall colour balance looks okay as well. There’s not an overly obvious tint to the screen as a result of the red, green and blue channels not being balanced correctly.

All told, first impressions are pretty good. So long as colour accuracy for editing isn’t a priority, this display seems to be delivering the goods.

Proving that looks can be deceiving, though, this display performed far worse than expected once we fired up our test equipment. Both our Xrite iDisplay Pro and Spyder 5 Elite colorimeters reported this display’s default colour temperature as being around 8000K, which is far higher than the 6500K that a display like this should aim for. Switching to the display’s Warm colour temperature mode and things improved but we’re still a long way off 6500K. 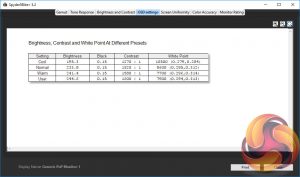 A high colour temperature corresponds to a bluer looking image, but oddly while there was a slight tinge to the display, it didn’t seem as strong to the naked eye as these test results suggested.

What’s even more strange is that when we came to calibrate the display, sure enough the blue channel was far higher than it should be, but it only then took reducing the blue channel from 50 to 47 in the monitor’s OSD to totally correct this imbalance. Normally such a strong imbalance would require a far more significant change. Furthermore, to the naked eye the change was very subtle. 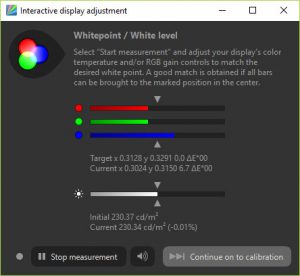 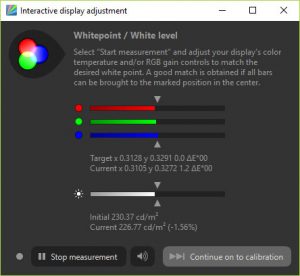 Dropping the blue channel from 50 to 47 corrects this significant colour imbalance.

Regardless, the upshot is that this display technically doesn’t have very good colour balance but it’s not that obvious in real life.

Otherwise, though, this display’s image quality impresses. Its contrast, in particular, is quite astonishing. It registered 3755:1 in our tests, which is well above typical VA type panels (they tend to be between 2000:1 and 3000:1) and nearly quadruple what IPS and TN panels can do.

What’s more, you can even get a higher figure than this by cranking the contrast setting all the way up from its default level of 80/100 to 100/100. Doing this we hit 4143:1, though image quality noticeably deteriorated.

Likewise, you can reduce the contrast all the way down to 118:1 (0/100) but again the image just doesn’t look right. However, unlike with the vast majority of monitors where it’s simply not worth touching the contrast setting, here you can comfortably play around. Anything between 40/100 and 85/100 is useable, though we would be inclined to stick with the default setting. 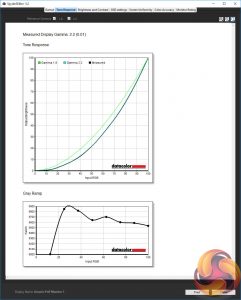 Also up to snuff is the gamma score. This is the rate of change from light to dark, with a high gamma score making for a darker looking image while a lower gamma makes for a lighter looking image. The standard for Windows computers is 2.2 so this display gets very close, which is good as there isn’t an option in the OSD to adjust this. 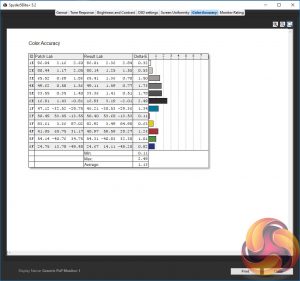 Overall colour fidelity is also impressive. A Delta E score reveals how fine a difference between colours a display can show, with a lower score being better. An average of 1 or below is excellent, while below 3 is good, so this display’s score of 1.13 is impressive. 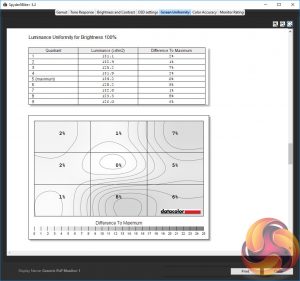 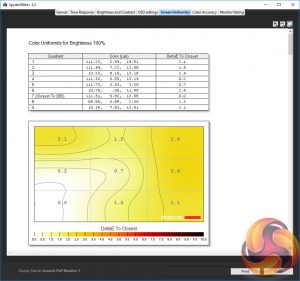 Finally, we come to the overall uniformity of the display’s image and here the MAG271CR again impresses. Its brightness varies by just 3.5% on average across its entire surface while colour accuracy also varies by just 1.4%. Both are excellent results.

So that’s the default image quality but displays can also be calibrated, which is what we did. As mentioned earlier, all it took to bring colour balance into line was changing the colour balance settings from 50x50x50 to 50x50x47 (RGB). The rest of the calibration process was done automatically in software. 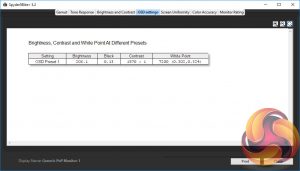 Our test results after calibration were interesting. Colour temperature had improved but was still higher than it should be but otherwise colour accuracy and gamma both improved.

All told, this was a bit of a tricky display to nail down in terms of its colour performance as it didn’t seem to get along with our test equipment – we’re sure those colour temperature figures are higher than they should be. But the take away is that you’ll probably benefit from reducing the blue colour channel just a little, to get a more accurate image.

With its clear focus on entertainment and gaming, rather than colour accuracy and resolution, the MAG271CR really needs to nail it’s gaming performance but unfortunately it falls short. The problem is simply the native response time of the LCD panel.

VA LCD panels are notoriously the slowest when it comes to response time, with there being far more noticeable ghosting or smearing than with other LCD types. They’re getting better but they’re still the worst. This results in a very soft-looking, blurry image that’s particularly distracting for fast-paced competitive gaming.

MSI’s solution is of course the backlight strobing technology, and sure enough this massively improves the overall sharpness and responsiveness of the image.

The trade off, though, is greatly reduced brightness. The monitor drops from an already fairly modest maximum brightness of 287nits to just 78nits. That’s gloomy even for use in a pitch black room. 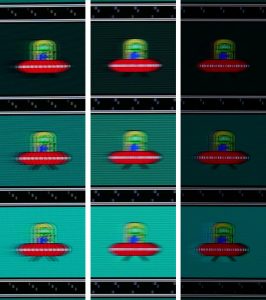 It’s not that this dimness totally ruins the MAG271CR’s gaming credentials but it does significantly dent them.

As for the 144Hz refresh rate and Freesync, they both work as expected, resulting in a smooth, tear-and stutter-free image.