Back in November 2013, a rather unusually shaped box arrived at KitGuru Labs. Inside was the AOC Q2963PM monitor with a rather unique resolution offer of 2560×1080. With the price now under £300, we decided to revisit our Budget Monitor of the Year 2014. But, this time, it brought a couple of mates.

KitGuru loves novelty and innovation as much as we like technical excellence and value. It’s not often you get all of those items in the one package, but that’s what AOC’s 29″ Q2963PM monitor delivers.

The additional real estate is enough to make anyone who sees it, want it. Simply put, it adds to your productivity.

Multiple studies have shown that the increase in productivity can be anything up to 90%. Here’s a compilation of studies from Microsoft and others.

The AOC Q2963PM allows you to experience the increase flexibility and productivity from a second monitor, but on a single screen. From our experience of using the AOC Q3963PM since November, here are some typical set-ups:-

Video editors should be aware that the AOC Q2963PM can take a second input to offer ‘picture in picture’, which can be very useful.
The ‘Key Features’ list is impressive:-

Colour reproduction takes some tweaking, but ultimately is very good.

We loaned an AOC2963PM to a professional photographer who used it to do the final edit on a product session for Lancôme, and they reported that the client was very happy with the results.

We thought it might help you visualise the width of the AOC’s landscape if you saw it next to regular sized humans. In this shot, Storm applies to the finishing touches to her friend’s make up, while Yaz grips the 29″ AOC monster in an artistic way. 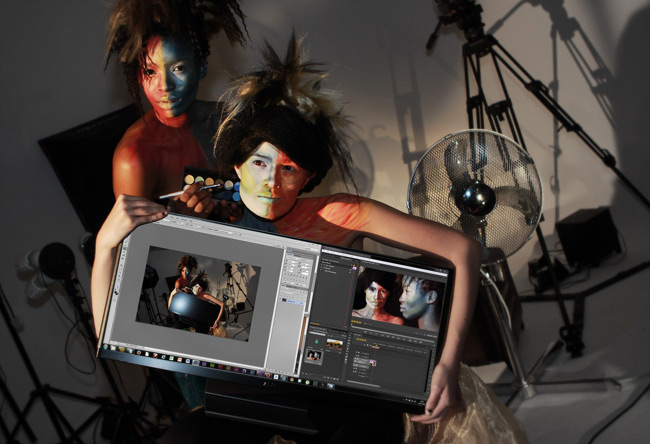 .KitGuru says: Overall, we have found this screen to be reliable, accurate, flexible and useful. But now comes the real test. We will ramp up to a second and finally a third AOC Q2963PM monitor. Let’s see how that kind of resolution plays out.