Ever wondered what happens when you combine a mobile phone with a gaming mouse?  That’s a question that seems to have puzzled scientists at Razer’s technology and design centre, floating above planet Earth in a geo-stationary orbit above Tesco, Southend-on-sea (or so we’re led to believe). KitGuru spies report back on the latest rodent developments.

Synonymous with hardcore gaming, Razer has carved itself a sizeable chunk of the market.
.

Pro-gamers have won plenty of tournaments with Razer and amateurs love the fact that they can go to a high street store and get hands on with a full range of options – until they find the one that’s right for them.

OK – enough background – so where does the mobile phone come into this?

The kind of thing that would drive a regular user nuts will, we’re promised, drive pro-gamers into ecstasy.

As long as they’re into WoW and the like.

Embedded into the side of the mouse, appears to be a complete, curvy, self-illuminating keypad.

Each key is completely programmable, so multi-component-smart-moves can now be had with a…  Well, that’s what we’re not sure of.

Just how many of these will need to be hit with the ‘big, phat, soft, fleshy part of the inside of your right thumb’ is anyone’s guess. Razer seems confident.

Price?
We’d expect the UK wired version to be around £75 and the wireless unit just over £100.

Hands-on?
Check out your favourite local store to see when they land near you.

KitGuru says: Pro-class WoW players seem to love the heavily programmable keyboards, so they will no doubt splash up to £120 on one of these to see if it gives them an unfair advantage (as long as they are right-handed, we wouldn’t expect anyone to try and use this phone pad with their little finger!). 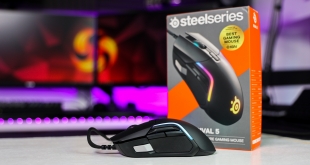 Want one mouse that works for a load of different genres? We check out the Rival 5