Globacore, a Canadian company specializing in creating unique AR/VR experiences, has dug deep in the ol’ chest of fond memories and converted a childhood favourite into a HoloLens game. Aptly named HoloLems, the AR adaptation is basically a tribute to the classic 90s videogame.

Lemmings was a 2D side-scrolling puzzle-platformer game which had you saving the lives of these furry, yet incredibly stupid little creatures who insisted in walking towards certain doom. Each level would see you employ individuals lemmings in specific roles to direct others to safety. It was fun, it was clever and it had one of the best game soundtracks of its time… It was also a massive hit for all sorts of platforms from the original release on the Amiga, to the SNES and PC, and spawned four sequels to the original.

Much like the well-known Minecraft live demo, the HoloLens version of Lemmings involves projecting the game level on surfaces around you, with the device reading the surrounding area and generating deadly pitfalls for your innocent little lemmings to die in. Your job, as a HoloLenser is to use the odd lemming or a few to redirect the remainder of the herd over, under, around or through obstacles to safety. 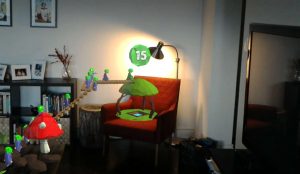 In other words, wherever you don the HoloLens, makes up for an entire different level of the game.

Despite Microsoft’s focus on the more professional aspects of HoloLens use, including a marketing gimmick which involved firing one off into orbit so astronauts on the ISS could play with it, the applications of AR are just too good to be passed by for entertainment, especially when it involves bringing to life this golden oldie.

Globacore, who seems to have developed the game in good fun, is providing it free of charge, if you have a HoloLens and want to try it out.

KitGuru Says: If you’re old enough, you’ll remember the Lemmings franchise quite well, and how much this puzzler impacted the gaming scene back in the 90s. Someone at Globacore clearly grew up on the little green-haired critters.