Following hot on the heels of the Cortana-powered Harman-Kardon Invoke soft launch, Amazon has announced the imminent release of the Echo Show, a digital home assistant-slash-display with integrated Dolby-certified speakers.

Amazon’s new device builds on the Alexa assistant and adds a number of new features. This will connect you with a number of online services and leverages its video display. Amazon has also been particularly clever to sign up a number of digital services, home automation devices and “connected lifestyle” apps, so you can control your home, order a Uber, watch the news, view a Youtube video or get your digital music service playing on your Echo Show. If a contact has the Alexa app on their smartphone, or another Echo Show at hand, you can make video calls too. 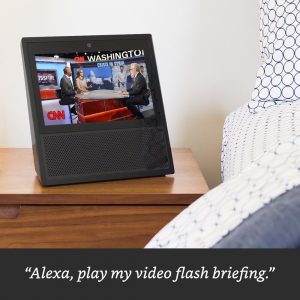 Under the hood of the Echo Show is an Intel SoC, with an Intel Atom x5-z8350 Cherry Trail processor, 802.11 a/b/g/n WiFi, 7-inch touchscreen, dual 2-inch speakers and 5MP webcam for video conferencing. It also features an array of 8 microphones with beam-forming technology to help voice recognition.

The Echo Show is on pre-order now for $229, in the US, with an estimated delivery date of June 28. Amazon has also cut prices on the original Amazon Echo by $30.

KitGuru Says: Amazon seems to have pulled a fast one on Microsoft and Harman-Kardon and the Invoke… with the added edge of getting the product faster to the market.

Previous Foxconn looking to build factory in the US, move closer to Apple
Next Qualcomm launches Snapdragon 630, 660 SoCs