Home / Professional / Development / Guitar Hero might be making a comeback

Ah Rhythm games. If the second half of the '00s gave us anything in gaming, it was you. For a few short years, gamers everywhere were click clacking away on noisy plastic guitars, improving their finger dexterity to the benefit of no one but their gamer score and their respective partners. But it didn't take long for the fad to die off and today it's been years since a big Rock Band or Guitar Hero game was released. However that might soon change, as rumours suggest that a new game from the latter series is in the works and may be announced at E3 this year.

At least this is what Kotaku's sources are saying, claiming that to try and bring the series back to popularity, publisher Activision was pushing for a more ‘realistic' art style, which would do away with the cartoony look of previous games in the series. As you would expect, the revamping of the franchise will also bring a revamped controller as well, with new guitars said to be in development for the PS4 and Xbox One.

A full reveal of the game is expected at E3, with a release date of some time in the latter half of the year. 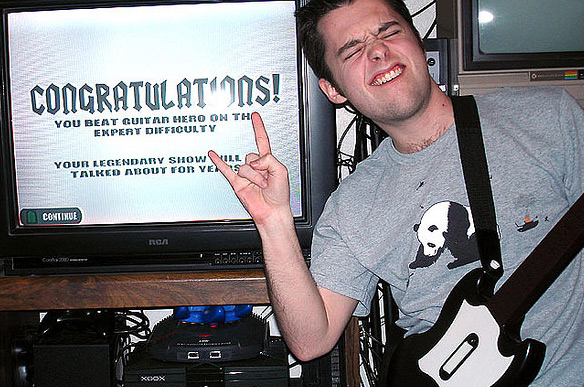 We were all rock gods once

While this could all be hearsay that goes nowhere, it's interesting that the rumours have appeared only shortly after similar rumours for a resurgence of Rock Band. Could it be that Activision is simply making sure its own developments are keeping pace with that of its competitors?

KitGuru Says: Would any of you guys be interested in picking up a Rockband again? If you have one of the PC compatible peripherals, Frets on Fire is always freely available.

Previous Riot claims League of Legends at its cleanest yet
Next OCZ Challenge update: 3rd ARC 100 drive dies at 384TB