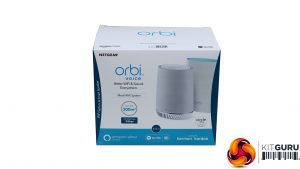 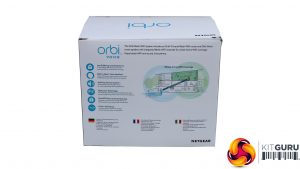 NETGEAR maintains the same packaging motifs as other members of the Orbi range. 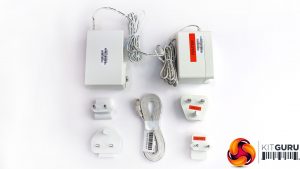 Apart from the units themselves, you get their respective power supplies, with adapters for UK and European plugs, plus a single ribbon Ethernet cable for connecting to your broadband router. You’ll notice that the two power supplies are slightly different. The router’s is 12V 3.5A, whilst the speaker satellite takes 19V 3.16A, as the audio output necessitates higher power consumption. 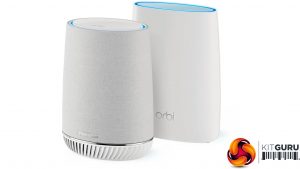 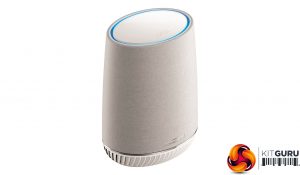 The RBS40V looks similar to the RBR50 router, but with an open grille at the bottom for the subwoofer, and grey speaker-style fabric over the main body. 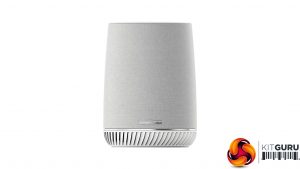 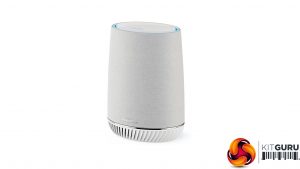 The material on the outside of the Orbi Voice satellite is mildly reminiscent of the Bang & Olufsen Beoplay products. It can’t be a coincidence that NETGEAR is channelling the appearance of a premium audio brand, although the white plastic of the grille at the bottom and shiny top are more generic. The unit is also reassuringly heavy. 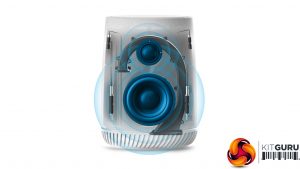 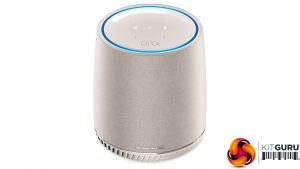 The speaker setup inside the Orbi Voice is definitely a cut above the average home voice wireless speaker. Let’s compare the specification to a KRK ROKIT active studio monitor, since we happen to have a pair of the 6in versions in the lab. The ROKIT 4 has a 1in tweeter alongside a 4in woofer, so the Orbi’s only slightly behind on tweeter size. The ROKIT 4 has 30W output power, so the Orbi’s 35W means it can go a little bit louder. However, the Orbi’s 63Hz-20KHz frequency range is behind the ROKIT 4’s 51Hz-35KHz. However, given that most people can’t hear frequencies over 20KHz, NETGEAR seems to have the important frequencies covered.

Although everything can be controlled via voice, there are still controls on the top. The power button is in the middle, you can turn on the microphone on the right, and mute audio output on the left. Neatest of all is the volume slider around the edge, which you slide your finger across to operate. 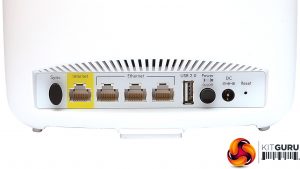 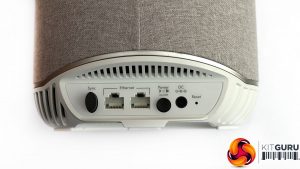 The RBR50 unit has four Gigabit Ethernet ports and a USB 2.0 connection. One of the Gigabit Ethernet ports is aimed at the WAN broadband connection, so you’re left with three for wired LAN devices. The USB 2.0, which initially didn’t do anything when the RBK50 was first released, can now be used for USB-connected printer sharing, but not for storage, strangely, although USB 2.0 is a bit slow for that anyway.

The RBS40V just has two Gigabit Ethernet ports. So if you do want to use the unit to share your network to wired devices around the house, that’s possible.

Overall, from a hardware perspective, this is a quality bundle that could act as a complete replacement for an existing but less fully-featured broadband router. It’s a shame you can’t share USB storage on the router module, but at least there is printer sharing, and the three extra Gigabit Ethernet ports on top of the WAN port will be adequate for most home networks.