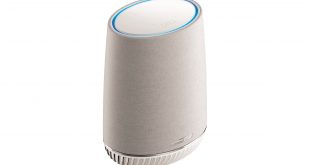 NETGEAR has arguably been the driving force behind the rapid adoption of Mesh WiFi, starting with the Orbi RBK50. But a parallel revolution has been taking place that is enabled, or at least made easier, by ubiquitous WiFi: smart speakers. The Amazon Echo range and Google Home were typical Christmas gifts last year.

The question is, how many separate devices do you need in your home, and what if you could combine your mesh with your smart speaker? This is the idea behind the NETGEAR Orbi Voice. It brings you not only NETGEAR’s much-vaunted mesh WiFi, but also Amazon Alexa functionality and quality audio, all in one.

There are two ways of obtaining the Orbi Voice. The RBS40V kit just includes the satellite, while the RBK50V we have on test here bundles a router as well. The router included is the RBR50 from the RBK50 package that was our first taste of NETGEAR’s mesh. But the RBS40V will attach to any of NETGEAR’s mesh offerings as an additional satellite, extending the WiFi alongside its other capabilities.

The RBS40V looks similar to other Orbi units, except that it is quite a bit fatter and has a grey material covering. That’s because it contains a reasonably hefty 35W speaker from Harmon Kardon. This includes a 1in tweeter and 3.5in woofer, with a wide 63Hz-20KHz frequency range. This puts the audio quality potentially in a different league to Google Home or Amazon Echo Plus. The former has a single 2in speaker, whilst the latter has smaller 0.8in tweeter with 3in subwoofer. The Orbi Voice is more in the league of the Sonos One where audio output quality is concerned.

Of course, the key feature is the voice command capability. The Orbi Voice has four field microphones on the top, with Amazon Alexa capabilities built in (like the Sonos One). There are standard Alexa buttons on the top, too, but they’re touch-operated so you can’t see them unless lit. The usual array of Alexa commands are supported, alongside a wide array of streaming music services. 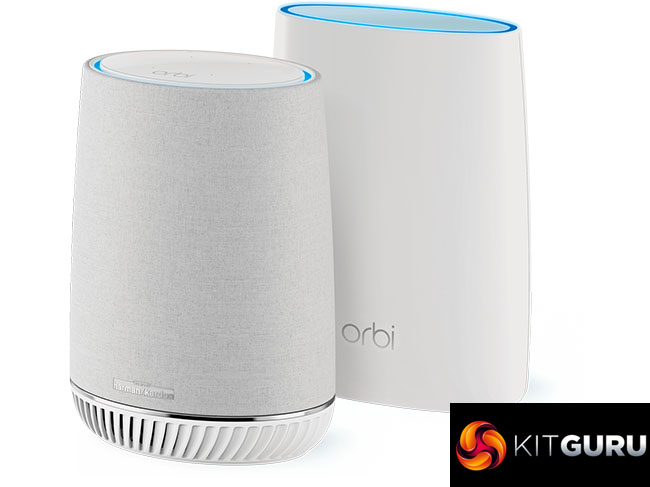 So this is a capable wireless Alexa-enabled speaker, but it can also extend your WiFi. Perhaps the only mild disappointment with the RBS40V is that, while the bundled RBR50 router has a 1,866Mbits/sec backhaul, the RBS40V only offers 866Mbit/sec, so in theory the mesh won’t be as quick as with NETGEAR’s RBK50 flagship. NETGEAR claims AC3000, but the satellite is only AC2200. Otherwise, the RBS40V’s tri-band capabilities are decent, offering 5GHz 802.11ac for client devices at 866Mbits/sec and 2.4GHz 802.11n at 400Mbits/sec.

Overall, then, the NETGEAR Orbi Voice has a promising bundle of features. The Amazon Alexa speaker aspect is not a half-hearted addition, but has a premium specification. Unfortunately, this means a premium price, in excess of £400 for the bundle, and £280 for the standalone unit, both of which are significantly more than the basic Google and Amazon options, even if you factor in a mesh networking setup on top. So the Orbi Voice really needs to deliver on all levels. Let’s find out if it does.