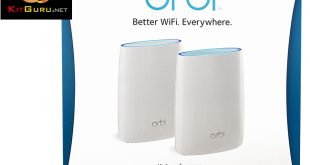 Now that decent WiFi is up there with running water, electricity and breathable air where home and business requirements are concerned, even the latest WLAN standards can be a little deficient. Serving an entire house, or multi-room small business, with a single WiFi router can often be problematic.

This is where Netgear’s Orbi comes in. Promising to reach 4,000 square feet (or 300 paces in any direction according to our interview with Netgear European product marketing manager Lionel Paris), and the ability to serve 250 devices at once, or at least 50 when streaming video or gaming, the Orbi promises to have you covered, no matter how big your premises. 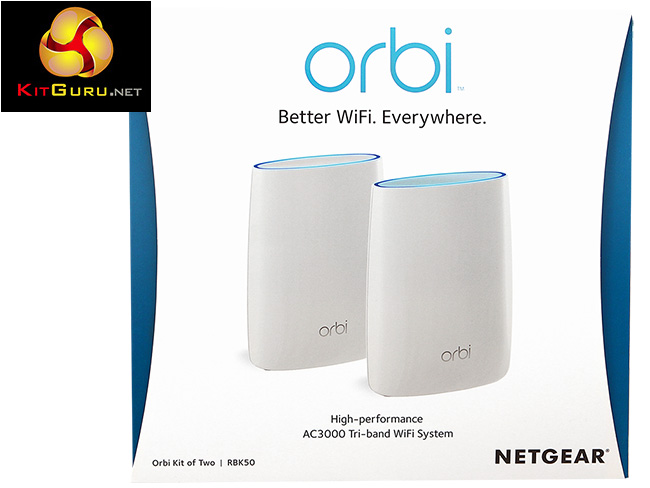 The secret sauce, as the image on the box shown above implies, is that for your rather princely sum of just under £350, you get not one but two devices. These work as a team to relay your network around the area. WiFi repeaters are readily available already, or you could use powerline networking to extend your network to a second router strategically placed elsewhere. But neither provide perfect solutions, as they usually create two different WiFi networks rather than extending the original one. Instead, Netgear’s Orbi promises one seamless network with devices switching between the two Orbi devices seamlessly as they move around the WiFi coverage zone.

The technology that allows this to happen is a version of mesh networking. Like the Netgear Nighthawk X4S D7800 4×4 802.11ac, the Orbi is a multi-band router, in this case tri-band. But one of these bands is dedicated to communicating between the two units. Mesh networking has been a dream of wireless network theory for years, and has some theoretical similarities to the peer-to-peer system of BitTorrent. Each node relays data around the network, so they help each other out to cover a wide area.

As you might have guessed from this description, Netgear plans to offer satellite units as upgrades, and each one in theory can add another 2,000 square foot of coverage to the WiFi network. The Orbi system will potentially be able to support really expansive wireless networks without the need of cabling other than power – ideal for a big house, large outdoor event, or sizeable temporary office. Or even WiFi by the pool!

For now, though, we have the starter kit with just two units for review today. The primary router unit is intended to be installed next to an ADSL or cable modem, which Netgear presumes will be somewhere at the edge of the premises. The satellite unit is then meant to be placed as centrally as possible, to serve the whole space equally.

The primary WiFi specification is meaty too. With six high-performance antennas there is plenty of hardware assistance for MU-MIMO simultaneous streaming over multiple frequencies and standards. Implicit/explicit beamforming is supported on both 2.4GHz and 5GHz wavebands, and Netgear promises AC3000 performance, made up of 1,733, 866 and 400Mbits bands. Netgear’s Nighthawk router with AC3000 already has a great reputation for range and performance with just one device, so with the Orbi’s technology as well the possibilities are very promising.

However, the fastest 802.11ac connection, using four antennas and running at 1,733Mbits/sec, is the one that is dedicated exclusively to connecting the router to the satellite. So the bandwidth available to end-user devices will be considerably behind routers like the Nighthawk, and consists of the two-antenna 866Mbits/sec 802.11ac and 400Mbits/sec 802.11n bands of the tri-band specification.

Both router and satellite devices have multiple Gigabit Ethernet ports, so you can hook up wired devices to either. In theory this sounds like the dream WiFi product, despite the price. But of course that’s only if it works as advertised. Read on to see what we discovered when we put Orbi through its 300 paces.