Back in the mists of time (it was 2006) Bigfoot Networks launched the Killer NIC network adapter with a PCI interface and an astonishing price of US$280. It was an interesting piece of hardware that promised to reduce ping times and latency for gamers by bypassing the Windows networking stack but the price ensured that it remained an expensive curiosity. In 2011 Bigfoot Networks was bought by chip maker Qualcomm and while the Killer name has continued to appear on various laptops and motherboards the focus moved from hardware to the Killer Network Manager software package.

There has been a noticeable shift since late in 2014 when the Killer brand was spun off in a separate company called Rivet Networks. These days you find Killer Ethernet and Wi-Fi in a good many laptops and motherboards, however this is not immediately obvious. Very often the only indicator that reveals you haven't got the expected Intel networking hardware inside your new computer is the K logo in your System Tray.

Hardware
Rivet Networks was keen to show us what was going on behind the scenes so we took a look at a PC Specialist Octane II laptop (review HERE) with Killer Wireless-AC 1535 and E2400 Gigabit which combine in a mode called DoubleShot Pro. As a comparison we used the Aorus X7 Pro Sync with Intel Wireless AC-7260 and Killer E2200 Gigabit. 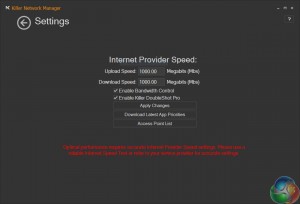 To assist our testing Rivet Networks sent a Linksys EA8500 router (£200) and a ZyXEL ZyWall110 (£500) which takes us to the heart of the matter. Rivet Networks uses its Killer Network Manager software to prioritise network traffic; games first, then streaming video/Skype, then your browser and finally ‘everything else.'

The logic is clear. Gamers never want to drop a frame, Netflix and Amazon Prime need bandwidth to stream video and anyone making a video call wants a seamless experience. Shopping on eBay is less demanding and torrents can wait for the important stuff to get out of the way.

So we had a wickedly fast router that guaranteed a fast connection between each laptop and our Virgin cable connection to the world as well as a ZyXEL Firewall that could be used to throttle bandwidth. This would allow us to mimic a situation where Skype battles with FIFA 16 and YouTube for bandwidth and then Killer Network Manager would save the day by acting like a traffic cop.

UK Broadband.
The logic was perfectly clear however it didn't chime with our real world experiences of the Internet in the UK in 2016. First, most UK Broadband users are obliged to use either a BT Home Hub or Virgin SuperHub router. Of course you can daisy chain a better Wi-Fi router, such as Linksys EA8500, to your ISP's router which should improve Wi-Fi coverage within your home or office but most people will stick with the router they have. As it happens, this piece on Rivet Networks prompted your reviewer to get a new Virgin SuperHub 2 ac to replace the previous 802.11n Superhub 2 model at a modest cost of some £20.

And then there's the ZyXEL ZyWall110. Take a minute to glance at ‘Akamai's State of the Internet' report (HERE) and you will learn the average UK Broadband connection is a mere 11.8Mbps, so if you allow 8MBps for Amazon Prime or Netflix your games and other software are fighting for scraps of bandwidth.

Alternatively the UK Telecoms regulator Ofcom tells us that average UK Internet speeds are 22.8Mbps which is twice as high (HERE). The problem here is the word ‘average.' Average cable speed is 41.6Mbps while average ADSL speeds are 7.3Mbps. Your reviewer ran a speed check on his ‘up to 150Mbps' Virgin cable connection and saw a download speed of 180Mbps with 11Mbps upload, which is clearly much faster than average. That massive download speed is rarely used but the upload is very useful for sending large video files that typically measure in the 1GB-3GB range.

Taking all those pieces of information together we have a crazy fast Internet connection that is available to a large part of the British public, provided you pay £40 a month to Virgin, and 802.11ac Wi-Fi provided by the Virgin Superhub2 ac router.

The set-up
The weakest link in this particular chain appears to be the Wi-Fi connection between the router and the client PC/laptop however the limitation is more likely to be come down to the websites you are using.

Generally speaking your experience using a particular site is affected by latency and web design as you grapple with animations and drop down menus. Most of us have downloaded graphics drivers from AMD or Nvidia and have probably been impressed by the speed of a 200MB driver download.

While it is nice to grab a graphics driver in five seconds it doesn't really matter if the process extends to 20 seconds but no-one wants to spend 12 hours downloading 50GB of Grand Theft Auto V.

And that is the context in which we lined up the PC Specialist Octane II and Aorus X7 Pro laptops. After some trial runs with torrents, YouTube and Dropbox we established the most reliable and repeatable test was to connect to Steam and download a game. We settled on DIRT 3 as it is 12GB in size which is large enough to time reliably yet typically downloads in ten minutes which means you can hammer through the tests one after the other. 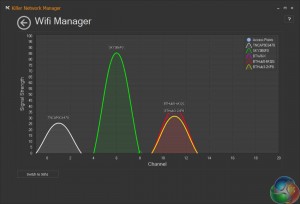 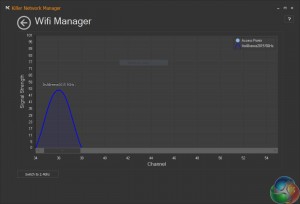 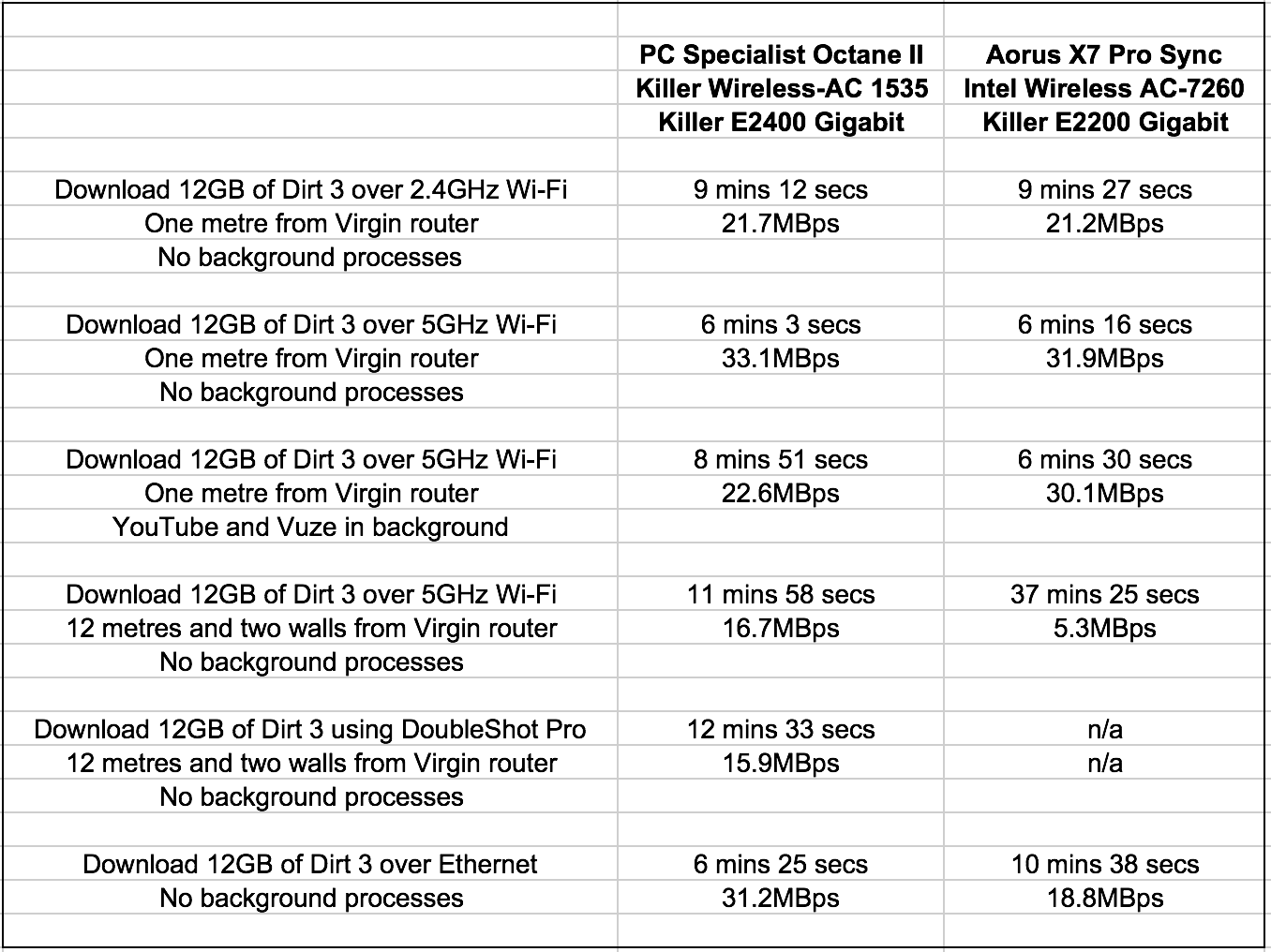 We tested with the laptops one metre from the router using first 2.4GHz and then 5GHz. After that we repeated the 5GHz test with YouTube and Vuze running in the background which takes relatively little bandwidth but which forces the networking software to make some decisions.

After that we moved the laptops to a different room which is 12 metres from the router and separated by two solid walls, again connecting at 5GHz.

Instead of taking a number of download times and averaging them to arrive at a kludge we instead downloaded three times in each circumstance and took the middle figure.

It is worth noting that on different days and at different times of day we saw significant variations in download speeds in the 5GHz 12 metre/two wall test with times stretching up to 30 minutes. That's still pretty good for a 12GB download but demonstrates that your neighbours, atmospherics and all manner of other things may well have an impact on the quality of your Wi-Fi.

Testing – the results.
At one metre Killer Wireless-AC 1535 and Intel Wireless AC-7260 have the same performance at both 2.4GHz and 5GHz, with 5GHz giving about 50 percent more speed than 2.4GHz.

When you have other software running in the background – we used YouTube and Vuze – the download speed for Killer Wi-Fi slowed noticeably, which looks poor. In fact this is correct behaviour as YouTube gets priority while Steam download is classified as ‘Other' and is moved backwards in the queue.

At 12 metres with two walls separating the router and laptops Killer Wireless-AC 1535 performed much better than Intel Wireless AC-7260. It has to be said that Intel 7260 has been updated with 7265 and there is a brand new Dual Band Wireless-AC 8260 on the market so it is perfectly possible that Intel has a decent response to Killer Wireless-AC 1535. Nonetheless Killer did a fine job and hung on to the 5GHz connection like a hungry dog chewing on a leg of lamb.

Using Ethernet to connect to the router yielded an unexpected result as the Killer E2400 in the PC Specialist Octane II was nearly twice as fast as E2200. The stopwatch does not lie but quite why one Gigabit Ethernet connection runs at a different speed to another is a different matter.

Finally we tried DoubleShot Pro. This was a half-hearted effort as we merely plugged in an Ethernet cable that connected to a HomePlug Powerline unit that uses mains power cabling to connect back to the router. This is Ethernet over Power, rather than Power over Ethernet and works brilliantly well for connecting games consoles, Smart TVs and other AV hardware as they are often parked in a corner where a Wi-Fi signal is relatively weedy. It's a Netgear XEB1004, since you ask.

We saw no benefit from DoubleShot Pro because both Ethernet and Wi-Fi were coming from the same network. Rivet Networks tells us the best way to use DoubleShot Pro is to connect to two different networks. That will allow the Killer Network Manager to route, say, your game traffic over one network connection while you download a torrent over the second connection. In theory this sounds plausible but in practice it seems like an artificial situation.

Rivet Networks markets its Killer E2400 and Killer Wireless AC-1535 hardware to the buying public but what you are really buying is Killer Network Manager software that appears to be powered by Qualcomm silicon with custom firmware.

The underlying networking technologies such as 802.11ac Wave 2 with Multi-User MIMO (Multiple Input Multiple Output) and Transmit Beam forming appear to be perfectly sound and to perform as well as any other networking hardware on the market.

Killer Network Manager provides the customer with QoS (Quality of Service) features that are typically found inside your router. Moving QoS software to the client machine certainly makes life easy and takes advantage of the massive processing power that is available in every modern laptop. You require a tiny fraction of a Core i5 to drive the features of Killer Network Manager where the software inspects each packet of network traffic and immediately assign a priority. This process can be invisible to the end user if they prefer to leave the software running in default mode.

By contrast Intel PROSet/Wireless software has no useful functions for the end user and the software is intended for client deployment in a corporate environment rather than playing games.

Killer networking hardware and software aims to make the most of your paltry Internet connection and thus allow you to multi-task without dropped frames, stuttering or any of the other malign effects you sometimes get when your network connection takes a hit.

Some things are simply beyond the power of Killer such as the charming way that Windows 10 installs updates whenever it deems it necessary. Similarly if you are the type of enthusiast who uses a VPN (Virtual Private Network) you might find your ping latency has increased to levels that make game play a nightmare, and once again that is outside Killer's control.

Here in the UK the people who are most likely to benefit from Killer Network Manager are the same mainstream users who would have benefited from the original Killer NIC. Ten years ago those were the people least likely to spend a small fortune on a posh network card but in 2016 the situation has changed. Killer networking is now a cheap upgrade when you specify your new laptop, probably costing around £15. If you are an enthusiast and have an Internet connection that weighs in at 100Mbps or 150Mbps you will have so much bandwidth that Killer will make little difference but when the going gets tough Killer Network Manager will do its best to help you maintain your connection.

KitGuru says: Killer Network Manager sorts out which software gets priority in the hunt for Wi-Fi bandwidth. It works well and is a cheap option for your new laptop but the best upgrade is a fibre Internet connection.