Update: this competition has now closed and we can announce our winner… Mark Bentley from Leeds! Congratulations to Mark, and thanks to everyone who entered.

We are running a HUGE competition this month. In partnership with Alphacool, AMD, Cougar, Gigabyte and Patriot, we have put together a custom water-cooled gaming PC worth £2,500 and one lucky reader is going to win it!

The build is centred around an AMD Ryzen 7 3700X and an RTX 2080 Super, providing plenty of power to run the most demanding Triple A titles, or competitive games at high refresh rates. Here is the full list of hardware included:

The water cooling gear has been provided by Alphacool, consisting of the following: 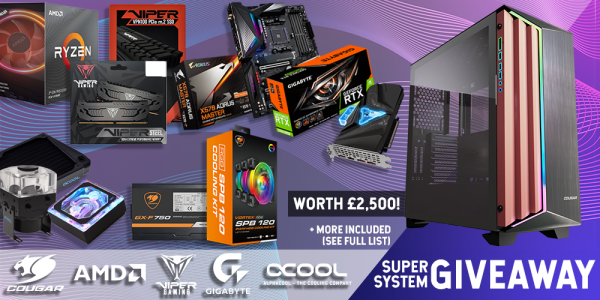 This time around, the competition will be running through Gleam, so you can head over to THIS PAGE to enter, or simply use the widget below:

There are some terms and conditions to keep in mind. This competition running from the 20th of April until the 27th and is open to residents of the UK and EU only. A winner will be chosen at random and if a reply is not received within 48 hours, another winner will be chosen. The prize can not be exchanged or redeemed for its monetary value.

KitGuru Says: Good luck to everyone entering, we'll be back soon to announce a winner!