Facebook Messenger could eventually merge back with the main app

Messenger has been a standalone application since 2011, officially becoming the de facto platform for chat when Facebook removed the functionality from the main app in 2013. Reports are suggesting that the Social Network might double-back on these plans in the near future, as the company is currently trialling chat integration once again.

When the chat feature was ousted from the main app, clicking on the messaging icon redirected users to download Facebook’s separate messaging app. Researcher Jane Manchun Wong has spotted that this isn’t the case in the firm’s latest round of tests, as a newly-built “chats” section that displays a list of saved conversations and the ability to send and receive messages. 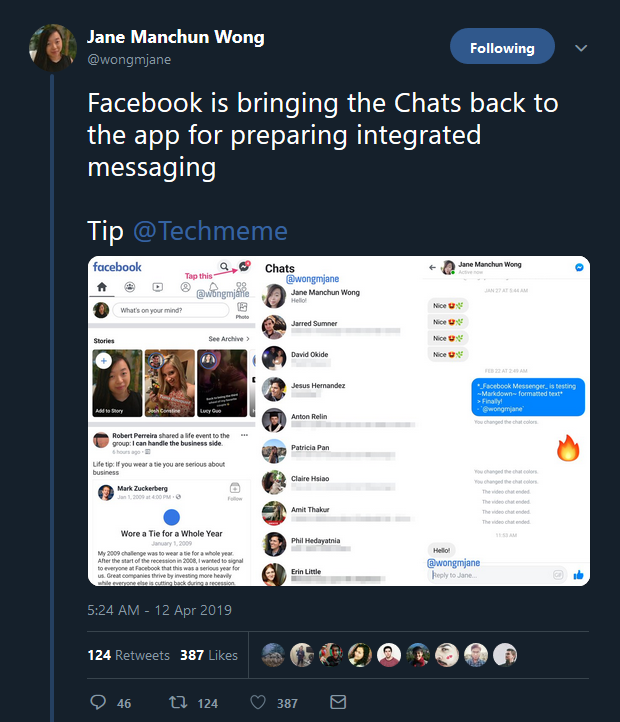 In order for the current Messenger app to coexist with the reintroduced integrated feature, it will omit key features found on the Messenger app such as sending pictures, making calls and giving message reactions. If a user tries to utilise any of the aforementioned, they will still be redirected to download the Messenger app where they can complete the action.

“We are testing ways to improve the messaging experience for people within the Facebook app,” a company spokesperson told The Verge. “Messenger remains a feature-rich, standalone messaging app with over a billion people using it monthly to connect with the people and businesses hey care about most.”

Messenger Lite, Facebook’s space-saving attempt at making its services easier to access by taking up less data, has proven particularly popular across the world despite its lack of features. It’s entirely possible that this has paved the way for integration once again, with hopes of bolstering interaction on the main site.

KitGuru Says: Although fragmentation of applications helps users escape the growing amount of bloatware from functionality they don’t utilise, it means less interaction on the main platform for those that exclusively use its messaging services. This seems like a natural balance between the two, although only time will tell. Will you use the main app if chat is once again integrated?