God of War director weighs in on Sekiro’s accessibility debate

The release of From Software’s Sekiro: Shadows Die Twice has sparked two heated debates within the gaming community concerning ‘accessibility’ and the possibility of an easier mode. Unfortunately, the two have continuously crossed over, diluting the terminology and causing confusion.

Known for Bloodborne and the Souls series, From Software has gained a reputation for notoriously difficult games that require players to learn the behavioural patterns of enemies in order to defeat them. The majority of the time, this means a whole lot of deaths and restarts, but players have widely agreed that Sekiro: Shadows Die Twice is the studio’s hardest game yet.

Due to its sheer difficulty, many have argued that the developer should consider implementing an easier difficulty to make the game more accessible to casual players and those that wish to embrace Sekiro’s more straight-forward narrative presentation compared to the ‘Soulsborne’ series. Despite this, God of War director Cory Barlog argues that accessibility is entirely different to the difficulty of a game and that an easy mode could weaken From Software’s original vision.

“Accessibility has never and will never be a compromise to my vision. To me, accessibility does not exist in contradistinction to anyone's creative vision, but rather it is an essential aspect of any experience you wish to be enjoyed by the greatest number of humans as possible,” Barlog explains on Twitter. “Something can be both difficult and have a good suite of accessibility features.” 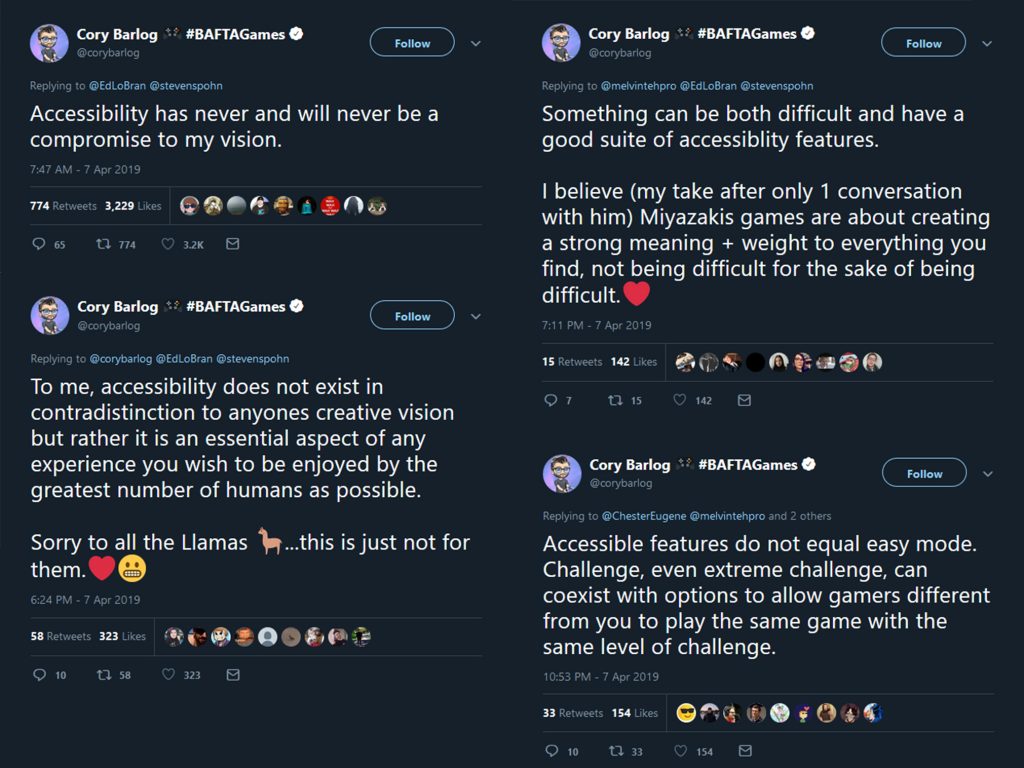 While there is some validity to wanting a more flexible experience within Sekiro, many experts consider that the term ‘accessibility’ has been taken out of context during the debate. COO of AbleGamers, Steve Spohn, has tried to provide clarity on the matter:

“The only time the word ‘easy' keeps being mentioned is by people who don't understand what accessibility is,” explains Spohn on Twitter. “Easy is subjective. What is easy for me, might not be easy for someone else. But with difficulty options, we can both enjoy an experience together. People, influential people, journalists, and media outlets are making this confusing by continuing to use the language ‘easy mode' — accessibility means options, not easy gameplay.”

For example, publisher Activision and developer Toys For Bob were lambasted for their omission of full subtitles in Spyro Reignited Trilogy last year, impeding the gaming experience for the hearing impaired. Many more games fail to include a colour blind mode for those with compromised vision. Many developers have rallied behind Barlog and Spohn’s statements that From Software should “do the right thing” by adding more accessibility options into Sekiro.

KitGuru Says: These comments are not to dissuade players from voicing that they would prefer an easier mode, but they do provide food for thought regarding the terminology used when advocating for difficulty options. There are people out there that truly cannot control the character on screen, see the entire menu or absorb the story in the same way as the wider population. Proper accessibility options are important for those people and should not necessarily be confused with different difficulty modes.