Development on next-gen consoles is well underway at this point, with Sony confirming several key specs for the PlayStation 5 and Microsoft announcing Project Scarlet. Developers already have their hands on early versions of this next-gen hardware and while devkits are normally kept heavily under wraps, the PS5 has been subjected to numerous leaks, with new images of the V-shaped console appearing online once again.

We received our first look at this PS5 devkit design back in August thanks to a Sony design patent. One game developer already confirmed the patent images to be legitimate and now, we have pictures of the hardware in real life, sat next to what appears to be an older set of Sony console developer kits. 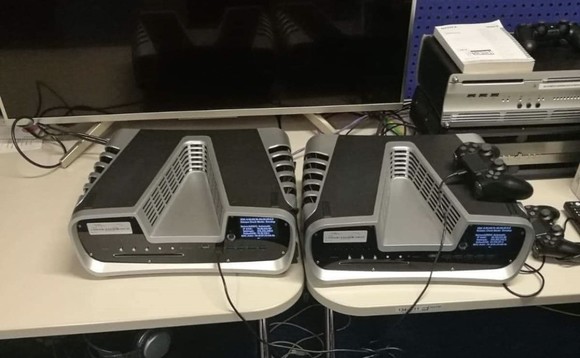 The image above was shared online by Twitter account ‘The Drunk Cat’, who had the image passed onto them from a developer working on a next-gen game. Adding weight to all of this is the newly designed DualShock controller seen in the images, which Sony also patented recently.

As always, it is important to note that development kits rarely resemble final consumer hardware and this likely won’t be the last iteration of the hardware that developers get their hands on before launch next year. Apparently, the V-shape design shown here is specifically so that developers can stack the consoles on top of each other while testing without the machines overheating.

KitGuru Says: There have been very few leaks regarding Microsoft’s upcoming next-gen console, so we don’t know much about the competition. At this point though, we do know a lot about the PS5 and with the way these leaks are going, we may well know a lot of what Sony plans to announce in 2020 well in advance.