At CES 2020, Thermaltake is launching a bunch of new hardware. We’ve already seen some new cases and TOUGHRAM modules but now we get to shine a spotlight on the company’s latest AIO cooler, with the RC360/RC240 entering as the world’s first all-in-one liquid CPU & RAM cooler.

The Thermaltake Floe RC360 and RC240 combines CPU cooling with RAM cooling as long as you have the compatible Thermaltake memory modules. On paper, this additional cooling should help users maximise their overclocking potential and cooling performance. The RC360 comes with three Thermaltake Airflow 120mm ARGB fans while the RC240 comes with two of them, just as you would expect. 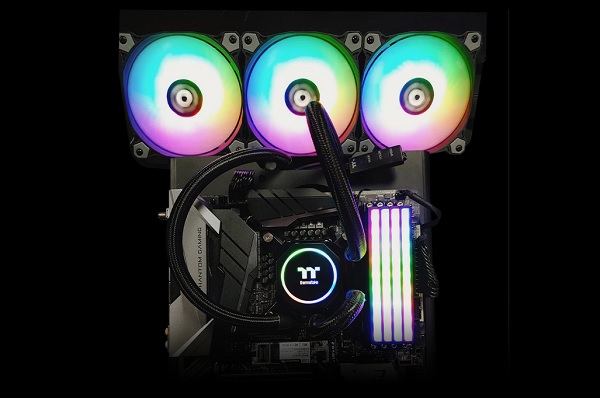 The water block uses a copper base plate for heat conductivity, while the tubing is sleeved for extra durability and a sleeker look. Both the Floe RC360 and RC240 are compatible with Thermaltake RC DDR4 memory modules, which are built using to the same level of quality as the TOUGHRAM series, including tightly screened ICs for performance, a 10-layer PCB and 10μ gold fingers for additional wear resistance.

As with all Thermaltake RGB products, this cooler is compatible with almost all major motherboard RGB Sync tools, including ASUS Aura, Gigabyte RGB Fusion, MSI Mystic Light, ASRock Polychrome and Biostar VIVID LED. Currently, the Thermaltake Floe RC360 and RC240 are due to arrive in Q1 2020.

KitGuru Says: Thermaltake first entered the RAM market with liquid cooled memory, so this is a nice evolution of that. It will certainly be interesting to see performance numbers when running both the CPU and memory through an AIO cooler. What do you all think of the Floe RC360 and RC240?

Previous Yakuza: Like a Dragon might receive an English dub – a first for the series in 15 years
Next CES 2020: ASUS ROG launches four new gaming desktops