MSI have a reputation for making great motherboards and their previous 790FX GD70 board received much critical acclaim. Not willing to rest on their laurels however, they went back to the drawing board and made some changes with the 890FXA GD70 in regards to board layout. With the new AMD 890FX chipset and SB850 Southbridge complimenting the USB 3.0 and SATA 6gbps ports this board looks to be fully locked n’ loaded.

This socket AM3 motherboard has been designed with the demanding enthusiast in mind – it is able to deliver increased PCI Express 2.0 bandwidth for ATI video cards in four way Crossfire and also supports AMD processors with up to 140W TDP, which also includes 6 core Phenom II X6 processors.

This motherboard supports all socket AM3 CPU’s – Phenom II X6/X4/X3/X2, Athlon II X4/X3/X2 and AM3 based Sempron processors. Obviously with AM3 support the motherboard will ONLY support DDR3 memory. It can cope with up to 16GB of memory in 1066/1333 and 1600 (OC) flavours. The AMD 890FX chipset is based around Hypertransport 3 at 5.2GT/s bandwidth and is matched with the AMD SB850 southbridge.

Are you already drooling? good, lets have a closer look …

Previous Interview with ADATA’s MD – JJ Jan
Next Jobs “surreal, but it doesnt mean anything” – win over Microsoft 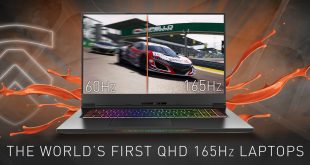 The world’s first QHD/165Hz gaming laptops have been revealed

Until now, QHD high refresh rate displays were usually associated with desktop PCs, but it seems Eluktronics is about to change that. The company has announced the world's first QHD 165Hz laptops, offering "the most crisp and snappy experience out of any laptop on the market".