As the countdown clock for the end Windows XP’s life ticks ever onwards, users who still have old technology have been given encouragement from companies like Gigabyte to re-evaluate their position, but what would it really be like living with an unsupported OS?

For over a year, the internet has been rife with rumours of a growing arsenal of XP-attacks that are being hoarded by criminal organisations across the globe. There are those for whom cybercrime is a way of life, where ‘attack code’ is constantly being bought/traded. As each exploit is picked up by companies like Microsoft, they consider how best to counter the threat – closing doors wherever possible.

In April, that ‘shutting of the doors’ stops.

The fear is that, starting 9th April 2014, business and personal users who are still on Windows XP will be subject to a massive attack from hoarded exploits. Here’s Microsoft’s official position on the subject, “If you continue to use Windows XP after support ends, your computer will still work but it might become more vulnerable to security risks and viruses. Also, as more software & hardware manufacturers continue to optimize for more recent versions of Windows, you can expect to encounter greater numbers of apps and devices that do not work with Windows XP”.

In the countdown to the 9th, KitGuru is going to be looking into the risks involved with not upgrading, including speaking to one of the UK’s top security experts Dave Shearmon, CEO of security software company Cryptic, about how this will affect business users. But for now, we’re more concerned with consumers.

Speaking with Andrew Ditchburn, technical marketing guru for Gigabyte, we quizzed him on how the change will affect average end users. He told us, “Microsoft has provided support for Windows XP for the past 12 years but that comes to an end on 8th April, 2014. Technical assistance for Windows XP will no longer be available and that includes the automatic updates that help protect your PC. Microsoft will also stop providing Microsoft Security Essentials for download on Windows XP too”.

“This means that Gigabyte, as a hardware manufacturer, can no longer develop new drivers or hardware to support Windows XP users,” he continued. “Our focus will be to work closely with Microsoft to deliver the latest technologies in support of its latest Windows operating systems.”

“If you bought a PC with XP, just as Vista was being launched, then a typical enthusiast system might include a CPU like the classic Q6600“, Andrew explained. “It was a great chip, but when you compare that with a modern CPU like the 4670K, it will struggle. Why not upgrade your life with new hardware and a modern operating system?”.

Of course Gigabyte and many other hardware manufacturers are looking to take advantage of the changing of the OS guard and now has a full set of offers for XP owner/operators available here. 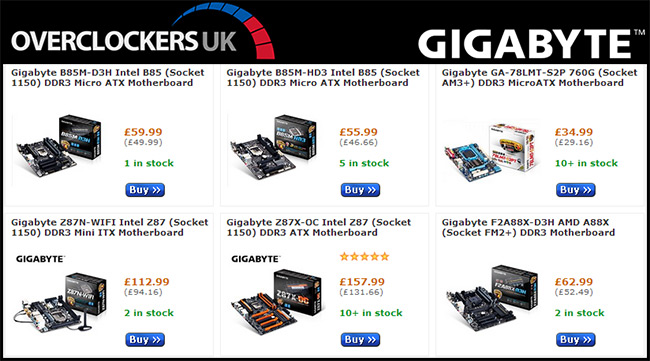 .
KitGuru says: Whether your preference is Gigabyte or one of the other top hardware vendors out there, it’s got to be a good idea to put XP behind us and move to Windows 7.