Virtual Reality topped the charts as the European Hardware Association today revealed the results of a massive survey into European technology buying trends for 2016. Almost half the respondents chose VR as their ‘most likely to buy’ new technology, with Smart Home and Connected Audio coming second and third. KitGuru co-presented this unique report to the industry at Distree.

Since January, KitGuru and the other EHA members have been running a in-depth survey to find the technologies that most interest our audience. Our meta data was combined with the results from the other 8 countries involved in the European Hardware Association – and the results were presented at the Distree 2016 technology event in Monaco.

The European Hardware Association brings together nine of the region’s largest independent technology publications, with a combined audience in excess of 22 million technology enthusiasts.

In total, over 10,000 surveys were verified and analysed. That analysis revealed that, on average, the EHA’s readership would be spending close to £1,000 on new technology products in 2016. Extrapolating the individual spending levels that we’ve seen in this survey, to the entire EHA audience, shows that our technology news and reviews help guide and influence a combined, pan-European spend of around €22 billion.

Koen Crijns from EHA founder member Hardware Info in The Netherlands said, “The survey measured the difference between ‘What people find exciting’ and ‘What they intend to purchase this year’. Virtual Reality topped both of these charts, so the opportunity is clearly huge”.

Dennis Bode from EHA Founder Member HardwareLuxx in Germany said, “The movement to web continues, with some countries reporting that almost 90% of the big technology purchases for 2016 will only exclusively online”.

There are some strong regional differences in Central and Southern Europe, but this chart shows that technology lovers in Northern Europe have very similar purchasing plans. 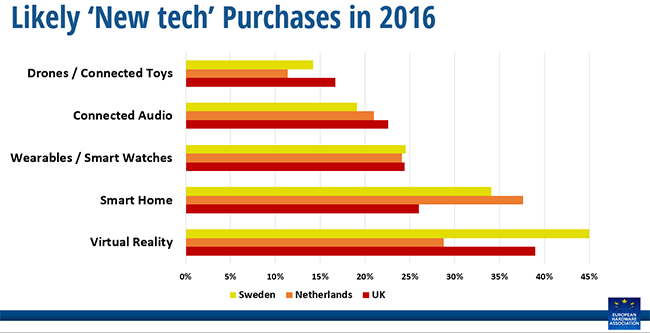 Even though VR continues to kick up a storm of interest, technology enthusiasts from across Europe seem much more interested in ‘traditional technologies'- especially solid state drives. 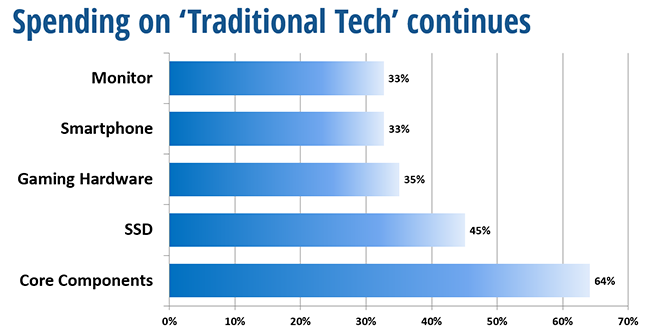 KitGuru says: Over time we will be working to build a powerful, insightful picture of the European technology market.