While it might not have the prize pool of The International 2014, G Skill’s World Cup for overclockers is heating up, with the six finalists announced right alongside a $10,000 cash prize for the champion. Set to compete are: der8auer from Germany, ZeR0_Dan from China, Hero from China, Xtreme Addict from Poland, Splave from the USA and good ol’ 8Pack from the UK.

To get to this stage of the competition, the finalists have had to compete in online qualifiers over the past month, consistently posting top benchmarks and overclocks from the comfort of their own homes – or more likely the hardware store they work at, since few home ‘clockers have access to the amount of NO2 these guys must get through.

These individuals will be heading to Computex to compete head to head for the grand prize, between 3rd and 6th of June, at the Taipei Nangang Exhibition. 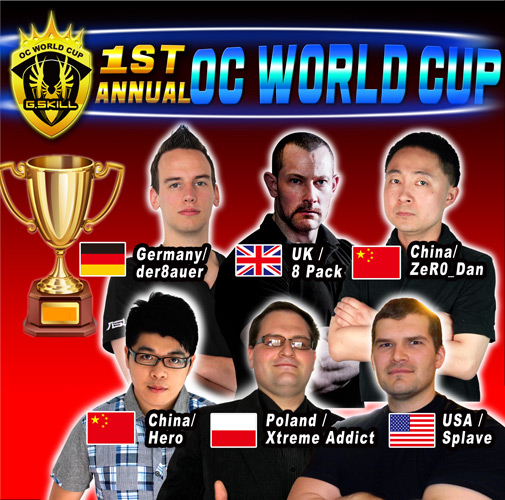 The schedule has 8Pack vs Hero on day One, with Splave going against Xtreme Addict at the same time. This competition is expected to continue through the next day as well, with Zero_Dan and der8auer facing off on the 5th. On the 6th, the final, final will take place between the victors, leading to the cash being awarded later that day to the world’s best overclocker. Runners up receive smaller payouts, though still not bad. Second place takes home $1,500 and a couple of 16GB memory kits, whilst third has a single kit and $1,000.

For more information, check out the HWbot page here.

Discuss on our Facebookpage, HERE.

KitGuru Says: Sponsors from Seasonic, MSI and of course GSkill will be in attendance, so swing by if you want some free swag.