After previewing a large feature set across the summer, AMD has now released its latest Radeon Pro Software Crimson ReLive Edition 17.10 for developers. The primary focus of the update is for its Pro WX 9100 and Vega Frontier cards, however, it also houses a number of optimisation as well as improved performance for the company’s physically-based rendering engine, Radeon ProRender.

While catering to its Radeon Pro WX 9100 and Radeon Vega Frontier Edition graphics cards, developers will have access to “Driver Options”, helping to optimise development workflows. This new, yet optional feature allows for easy swapping between “Radeon Pro Software” and the latest “Radeon Software Crimson ReLive Edition for Radeon Pro” with either of the aforementioned cards.

The reason these two cards are centre to the update is due to both models housing “a dedicated AMD Secure Processor built into the silicon,” which works alongside Radeon Pro Software and Microsoft Device Guard to protect them from malicious attacks as well as strengthening graphics-bound IP security.

Radeon Pro ReLive has also been refined to include a higher maximum recording bitrate, now allowing for up to 100 Mbps, alongside camera transparency options and user interface improvements. 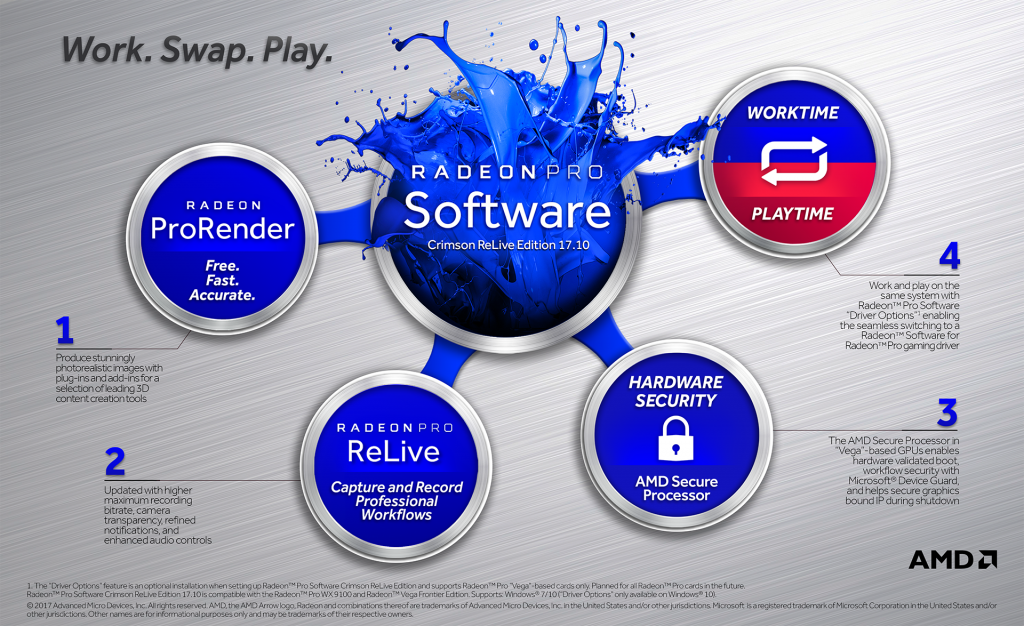 Radeon ProRender is now more responsive with interactive rendering, which AMD boasts will enable “artists to get their work done sooner.” This is done via support for plug-ins including SOLIDWORKS, Maya, Blender and 3ds Max, allowing for up to 14, 28, 29 and 35 percent faster rendering respectively.

ProRender has also been overhauled with MAXON Cinema 4D Release 19 (R19) integration, as well as offering open-source availability. Support for Foundry’s Modo is expected to arrive in 2018.

Other new features include Shadow Catcher material for greater control on shadow and reflection collection, IES lighting and IES file-format support for more realistic lighting and ‘simplified sampling’ which acts alongside add-ons and plug-ins to make sampling easier without the need to set anti-aliasing sampling.

KitGuru Says: AMD's 17.10 update seems quite comprehensive and I quite like the idea of its push into supporting open-source, despite not being a developer myself. Have you used AMD's development kits before now? What have your experiences been like?