While it’s clear that software has an impact on YouTube’s performance, it seems as though Google is turning towards hardware in order to improve stream quality, launching its new “Device Report” service. The site categorises smartphones in terms of viewing experience, dubbing the best of the best ‘Signature Devices’.

Getting the thumbs up from YouTube isn’t exactly easy, as smartphones are judged based on a variety of factors including 360-degree video performance, DRM performance, High frame rate, 4K recording, High dynamic range and support for next-gen codecs. Once YouTube’s team is finished with its rigorous internal tests, it’s left with the cream of the crop for a premium streaming experience. 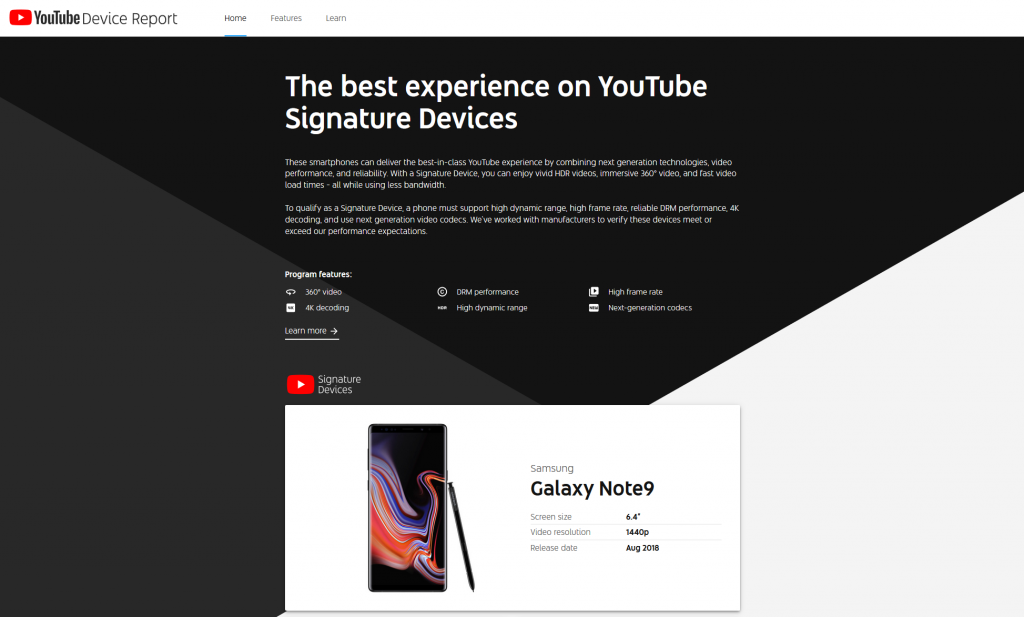 Reliance on hardware for streaming is something we have seen before when 4K resolution was first finding its feet. Intel was one of the first to enable systems to stream ultra HD content thanks to its 7th generation Kaby Lake processors. Nvidia joined shortly after with the introduction of its Pascal-powered GTX 10 Series. It hasn’t been confirmed exactly what YouTube will be pushing as it moves forward, but the Signature stamp of approval is certain to help spectators choose their next device more wisely.

So far, 19 recent Android flagships are the only smartphones that have impressed YouTube’s team, creating a relatively high standard for the certification. This consists of Samsung’s most recent Galaxy Note 9, as well as its Galaxy S9 and S8 range, alongside the OnePlus 6 price to performance king, Google’s Pixel 2 range and more from Sony, HTC, LG, Xiomi, Nokia and Huawei. Apple is currently omitted from tests until iPhones begin to support the VP9 video codec.

YouTube will continue to work with smartphone manufacturers moving forward, taking on board current and future submissions for testing in order to gain a better understanding of how its platform works across the variety of devices.

KitGuru Says: My first-generation Pixel XL is a little outdated to make the cut, sadly, but it still provides a pretty good viewing experience across its 5.5-inch 1440 x 2560 AMOLED touchscreen before upgrading. How does your handset stack up against YouTube’s Signature Devices?