The U.S.’ Defense Advanced Research Projects Agency (DARPA) has created a new carrier-like crane system for catching drones mid-flight. This isn’t like the eagles police have been training, but an aircraft carrier-like system of providing a safe ‘landing’ point for drones to return to. This could expand the effective range of military and commercial drones in the future.

While aeroplane technology enabled all sorts of new military tactics in the earlier parts of the 20th century, it was the creation of the aircraft carrier that allowed countries to really project air power over a global theatre. Although drones of today don’t need as much support as planes of old, it’s still handy to be able to collect them safely and the SideArm system developed by DARPA does just that.

Military drones typically used fixed wing technology to make them much more efficient than the quad-copters we’re used to in the consumer sector. However, that makes landing a little difficult. SideArm does away with that, by catching the drone from above and slowing it down to a comfortable velocity before arresting any further momentum in a net. 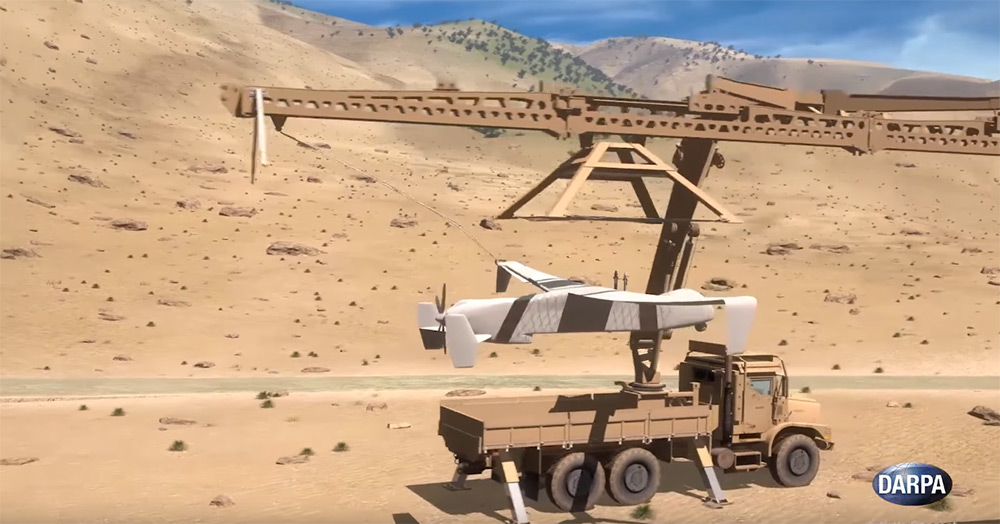 The idea behind SideArm is to make it so that drones can be launched and landed by one piece of apparatus, thereby standardising the equipment and making it possible to add drone-launch capabilities to a whole host of vehicles and buildings. It would allow for faster drone deployment in new fields of war and potentially make regular aid drops of supplies to regions that might need it, without having to worry about drone recovery infrastructure first.

As DARPA says in its breakdown of the technology (via TechCrunch): “SideArm aims to replicate carriers’ capability to quickly and safely accelerate and decelerate planes through a portable, low-cost kit that is mission-flexible, independent from local infrastructure, and compatible with existing and future tactical unmanned aircraft.”

If the system seems a little low-tech, that’s because it’s designed to be. It’s not only supposed to be effective, but affordable and a reversible installation if needed.

KitGuru Says: Seems like a neat system. Now it just needs some kind of conveyer belt system where it can recharge/refuel and not get in the way of other drones coming in. This could even give delivery systems like Amazon’s drone delivery much greater range and efficiency.