Ford plans to release car without steering wheel by 2021

Although current legislation still mandates that all vehicles must have some form of manual control, Ford is planning to mass produce a car without a steering wheel or pedals by the time 2021 rolls around. This is an accelerated development, considering fully autonomous cars have often been slated to arrive around 2025.

As driverless technology begins to infiltrate the automotive world, it seems that the development of it is ever accelerating. Although projected to take some time to come to market, partly due to the legislative challenges, the introduction of Tesla’s Autopilot mode seems to have kicked other manufacturers into high gear and now Ford is looking to market an autonomous car in the not too distant future.

The announcement, made by company president Mark Fields, at a recent even in Palo Alto, California, also highlighted how autonomous vehicles could change not only the way we get about, but car ownership in general. While many might imagine having their own driverless car, Fields suggested the Ford vehicle could be used in a sort of driver-free, Uber-like, ride-sharing scheme. 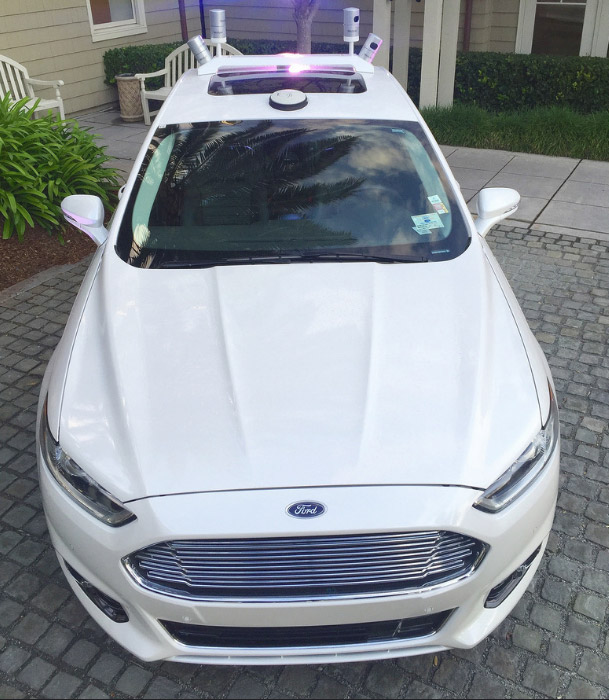 It’s this sort of service that Ford would provide for cities around the world he said. Although traditional car sales would still be a major component of its business, Ford believes that as more people use ride sharing and taxi-like autonomous services, people won’t buy as many cars as they do now. That means diversifying, so getting into the taxi game could be one way for Ford to stay competitive.

As the BBC points out, this is part of a larger strategy at Ford in recent years, to turn it more into a technology company, rather than just a car sales firm. It’s pushed for development in its own entertainment platforms and recently invested around £115 million in a company that specialises in LiDAR technology.

As forward thinking as it’s being though, Ford seemingly has a lot of catching up to do. Tesla is live-testing autonomous vehicle features on the roads right now and Google has millions of miles under its driverless cars’ collective belts. We don’t know how much testing Ford has done internally, but it will be interesting to see its further developments in the coming years.

KitGuru Says: If I knew it was safe, I’d take a driverless car right now. Driving is fine and dandy when it’s a sunny day and the roads are clear, but most of the time it’s jams and overcast skies.