One of my favourite features of smartphones in recent years, has been their interaction with far bigger displays. With a quick swipe or tap of a button I can send Youtube and other videos straight to my TV to enjoy in full, making watching favourite videos or streaming content much easier to do with a group of people, but what if you're somewhere that doesn't have a big TV to show these on? That's what Ostendo is looking to fix, by turning every smartphone into a projector capable of making a 48″ display out of any flat surface.

Ostendo has been working on miniature projector technology for almost a decade and it's now refined it enough to bring it the commercial sector. By 2015, it's thought that its tiny projection chipset will be found in a large number of smartphones, giving everyone the ability to pull a massive TV from their pocket whenever they need it, by controlling the colour, brightness and angle of every wave of light across a million pixels.

What's really impressive though, is that this is just the first generation of the chip. While next year we'll be able to fire off a 2D screen, within a few years Ostendo is confident it will be able to launch a commercial chip capable of projecting 3D images, which is when we start to see a holodeck future that could make Oculus VR start to worry.

“Display is the last frontier,” said Ostendo's CEO, Hussein S. El-Ghoroury.  “Over the years, processing power has improved and networks have more bandwidth, but what is missing is comparable advancement in display.” 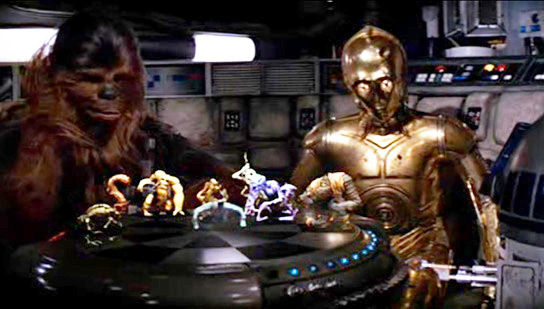 Holo-chess may be just a few years away

Of course he's being a little facetious, as today we have much higher definition displays in our smartphones than were on our TV stands just a few years ago, but we are still looking at 2D displays at a set distance most of the time. El-Ghoroury believes that time has nearly passed however and he's hoping to usher in the new age.

After nearly 10 years of work, he thinks he's nearly done it too. By combining an image processor with micro-LEDs, he's created what's called a Quantum Photonic Imager, which the Wall Street Journal got a preview of in action. According to its own experience, it showed “a set of six chips laid together that beamed a 3-D image of green dice spinning in the air. The image and motion appeared consistent, irrespective of the position of the viewer.”

Not only is this tech advanced in its holographic ability, but by using projection technology it's bypassing traditional resolution standards. While 4K displays might just be starting to hit TVs and monitors, they're not even a fraction as detailed as Ostendo's previewed technology. To put it in perspective, a 40″ 4k display at four feet distance might have around 200 dots per inch, Ostendo's projection could be as high as 5,000 dots per inch.

KitGuru Says: Perhaps the future isn't headsets after all, but projector technology. What do you guys think?