Microsoft calls on US government to re-address NSA concerns

It was this very week in 2013 that first saw revelations of the NSA, GCHQ and the US government's advanced spying regime first hit the internet, as Edward Snowden divulged masses of secretive documents to Guardian journalists and ultimately, to the world, from his hideout in Hong Kong. Since then we've seen some positive changes, like the European Human Right's court investigating British spying efforts, companies are now more vigilant with their hardware and software security and we're seen some of those responsible for the widespread snooping ousted from position, but it's not enough according to Microsoft.

Speaking out in a blog post, Microsoft's general counsel and executive VP of legal and corporate affairs, Brad Smith has said that the US needs to act now before the damage done to its tech industry is permanent. In spying on its own citizens and the world, the US government has created what he calls a “trust deficit.” This is massively harming the tech industry and will continue to do so if not addressed properly, he said.

What would he have the government do? Firstly, “recognise that US search warrants end at US borders,” and stop trying to strong arm US companies to break international law and the privacy of foreign citizens. “The U.S. government wouldn’t stand for other governments seeking to serve search warrants within American borders to seize the content of U.S. citizens’ emails without going through U.S. legal process. Why should it expect other governments to react any differently,” he said. Highlighting that Microsoft recently went to court to defend its customers when the NSA tried to have it hand over emails from its Irish datacentre. 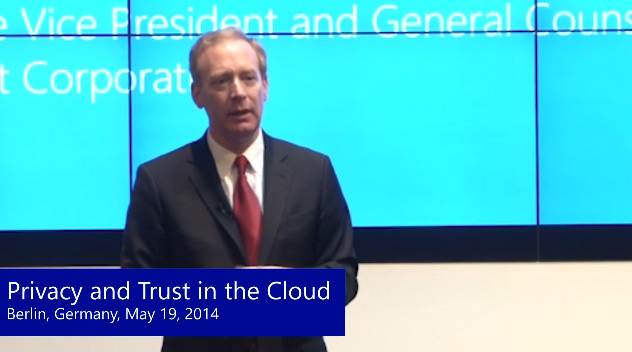 His next demand was that the US government halt all mass data collection and pledge to not hack into any data centres or cables – the method favoured by GCHQ – pointing out that the US regularly prosecutes those that try to hack US services, making it seem entirely hypocritical. He also highlighted Obama's seeming interest in stopping the collection of citizen data on a mass scale. That has yet to come about and he hopes that Obama hasn't forgotten it.

The biggest change Smith wants to see though, is more transparency. One of the biggest issues of the data collection has been that no company involved in it was legally allowed to talk about it because of secretive court systems. We even saw companies like Lavabit shut down their services in protest of government data requests that they couldn't ignore and couldn't talk about.

Ultimately Smith said, new international law needs to be created to make these sorts of practices transparent and if privacy invading, illegal, but it needs to be a unified effort. Other countries – especially those with negatively affected politicians, like Germany's Andrea Merkel – have already shown interest in making this happen and Smith wants the US to be part of the discussions on this more protected internet future. Not only would this safeguard the rights of future generations, but it would also help restore faith in the tech industry. A massively important step considering how much the US and other developed nations rely on trade in the technology field.

KitGuru Says: It's always nice to hear someone in s a position of power at a tech firm show their desire to protect customers. Too often it seems like Google, Microsoft and others see privacy as an afterthought. Clearly not.