Reach Robotics AR robot hands-on shows how versatile they are

Last week KitGuru was invited down to the Future Space labs at University of the West of England in Bristol, to get our first hands on with Reach Robotics' new augmented reality, smartphone controlled robot brawlers: the “MekaMon”. Complete with AR enemies to fight, other real world robots to battle, customisable weapon and armour load outs and more, these could be one of the hottest tech products of 2017.

The idea behind Reach Robotics' Mekamon, is to provide a single player, augmented reality experience, with a background story and campaign play, alongside a competitive multiplayer that lets you battle your friends in the real world. It's one part Pokémon, one part Robot Wars, one part Power Rangers Megazord. 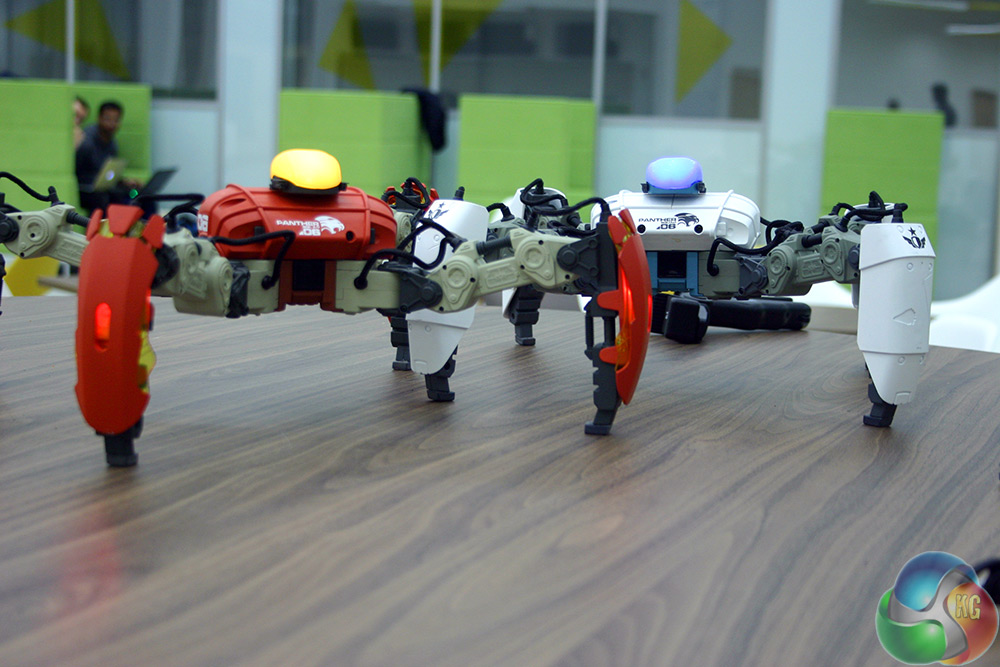 MekaMon will come in a number of different colour schemes. Pre-orders are for the right hand version.

It's not cheap, with the pre-order prices currently offering one robot priced at $250 (£200) and set to rise once they release. But when you get your hands on the MekaMon and see just how versatile they are, you can start to appreciate why this isn't designed as a cheap hobby. 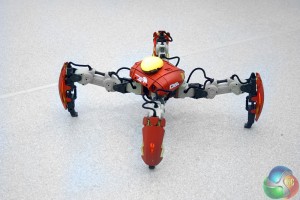 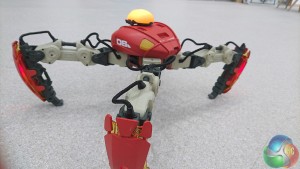 With a four-legged-span of around 30cm square and around 15cm in height, these robots can walk, crawl, shoot, spin, bow, dance and ‘die,' with appropriate and functional animations. With interest from kids as much as bedroom hackers, Reach Robotics plans to offer varied levels of access to the hardware, from simple pick up and play, dual on-screen stick controls, to much more-in depth customisation for those more interested in the mechanical side of things.

In our engineering-level demo, we were shown the ability to adjust limb speed, height, angle, spread, as well as step height and length, meaning you can make your MekaMon move exactly how you want it to if you fancy playing around with all of the options. 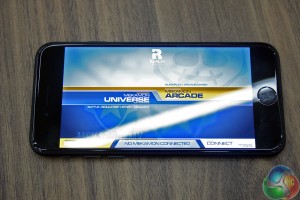 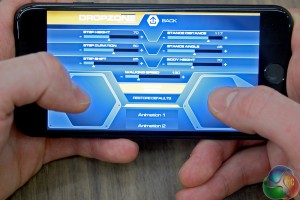 Currently the dropzone app gives you direct access to all of those features, as well as quick-slots for showing off certain animations which cover everything from firing a railgun, to taking a side hit and falling over. The two hexagons control positional and rotational movement respectively. 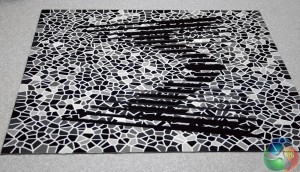 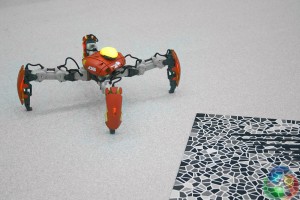 But of course these robots aren't just for walking, they're for battling too. In single player campaign or skirmish mode, you'll use a specialised mat to signify the augmented reality playspace and from there, the companion application populates the world with terrain and enemies. Although it's still being developed right now, the app currently has buildings and trees to navigate, as well as robotic drone enemies to shoot down with your various arsenal. 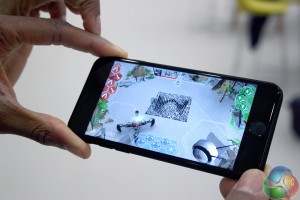 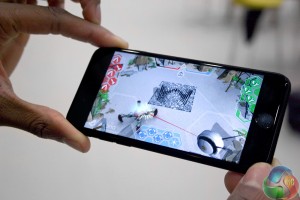 Although not present in the game just yet, there will be an expanded story that comes into play, giving you a purpose for fighting. For those more interested in the reward mechanics of the game, there will also be unlocks and skills to earn too.

Where the potential real meat of the gameplay is though, is in battling other robots. That is, your friends, family or anyone else you bump into who has their very own MekaMon. You'll kit your robot out, prepare it and ultimately battle, firing off rounds from various weapons, managing digital as well as physical attacks, and using terrain and line of sight to confound your enemy.

But why stop with two? While that will be the initial combat set up, there's nothing stopping you from battling against two or three opponents, or even creating mass brawls with multiple MekaMon on each side of the conflict.

To add a collectable aspect to the game, as well as provide deeper strategical options, every MekaMon can be customised with a number of different weapon and armour options. The starter kit comes complete with a pair of “Fury Rifles,” and “Light Shields,” which offer offensive and defensive capabilities respectively. However in the future there will be options for plasma rifles, railguns, advanced shields and all sorts of futuristic weaponry. 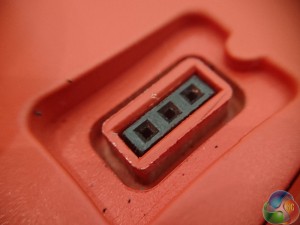 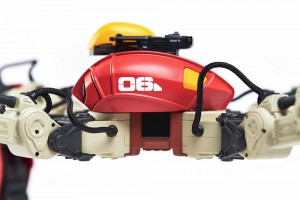 One of the weapon mounting points on the MekaMon, and a close up shot of one of the ‘Fury cannons' in place

These won't just be digital upgrades either, it's real plastic parts that you clip on to your MekaMon using specialised mounting slots. The robot will automatically detect what parts it's equipped with, letting you quickly plug and play with a revised arsenal of weapons and defensive countermeasures.

Each MekaMon will have about an hour of play time on the removable battery, but can be swapped out for a fresh one if you have several and want to keep playing. All communication is handled by Bluetooth LE so is compatible with all contemporary smartphones, using both Android and iOS operating systems.

Better yet, because of the digital nature of this product and how it integrates with the physical robot, the MekaMon are getting better all the time. At the current developmental rate, company founder Silas Adekunle tells us that a new firmware is released around once a month and every time they do the movements are smoother, the robots more responsive and the overall experience that much better. 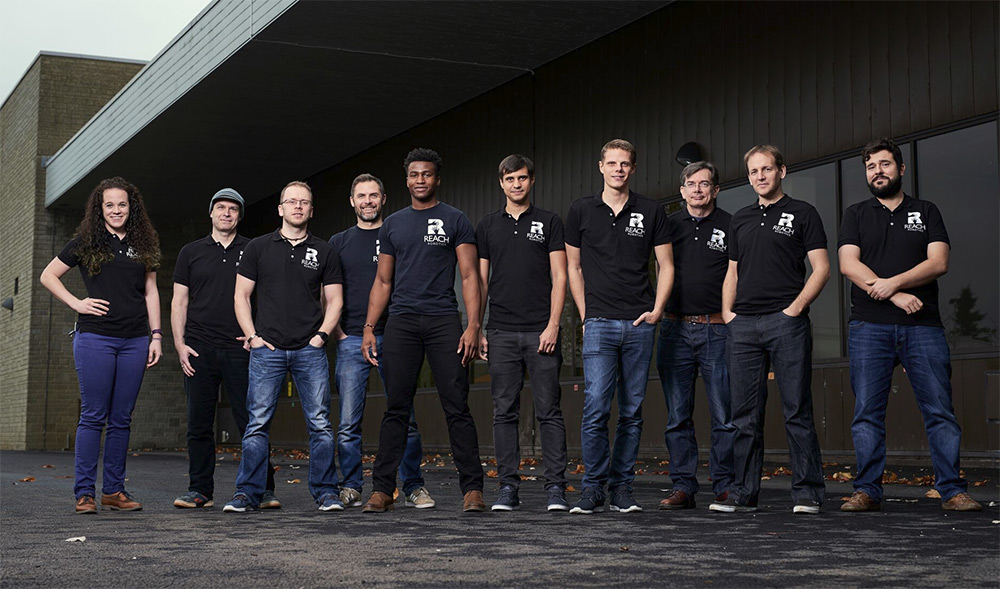 And that's what's so exciting about Reach Robotics and its MekaMon, this is all just getting started. While it's missed the Christmas launch window this year, you can pre-order your own MekaMon now and it will ship out in January next year. Throughout the next 12 months we'll see new MekaMon, the introduction of the single player story, multiplayer mini-games and missions to compete in and complete together and more.

There's a ton of content coming for MekaMon, and the base experience, the robots themselves, are incredible pieces of kit. I can't wait to see more.

KitGuru Says: Full disclosure, I have performed some writing works for Reach Robotics in the past, but received no compensation for this piece and covered my own travel expenses for the hands on. With that said, these robots are a lot of fun and amazingly capable. When they're available in 2017, we'll do our best to snap one up for review as I think you guys are going to love them.