This robot could be the first humanoid on Mars

For many scientists, physicists and fans of space venturing, getting to Mars could be the most important thing we do in the 21st century. But we have a long way to go before touching human feet on the red planet, so perhaps the best way to prepare the way for us would be to send a bipedal robot in our stead. Meet Valkyrie, a humanoid robot which could get to Mars before any of us. 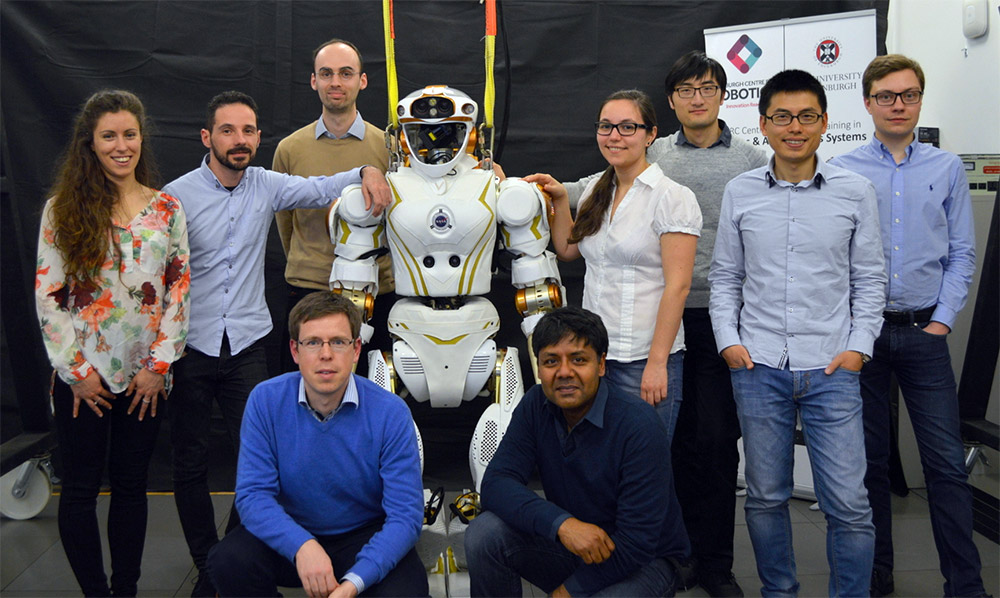 The research team seen with Valkyrie. Source: University of Edinburgh

We’ve been sending space craft to Mars (or at least trying to) since the ’60s and have had rovers on the red planet since the late ’90s, but they all lack the manoeuvrability and human-like functions of Valkyrie. Standing 1.8m tall and weighing in at 125kg (19.6 stone), the robot is capable of very complicated movements and because it lacks wheels, is able to get about without the need for ramps.

That should mean that getting bogged down in the Martian soil is much less likely to happen and Valkyrie should be more capable of traversing complicated landscapes than its wheeled predecessors. It does however require very complicated computational systems to keep it balanced, much like we’ve seen with Boston Dynamics’ Atlas robot.

Valkyrie has been sent from its designers at NASA, to the university of Edinburgh, where he will be tested and improved to help increase its available abilities, as well as make it less likely to fail when it is eventually launched to Mars at some point in the next decade, if all goes well (as per Ars).

The eventual plan would be to send Valkyrie to Mars, to test how a human-like figure can operate on the planet. Eventually though, humans could join it there and together with other robots, begin building humanity’s first world away from home. Think of it a little like Interstellar, but with less bill Irwin.

It will interact with humans though. It will need to be able to understand them, communicate effectively in return and know how to follow commands. These additions may end up making Valkyrie great for working here on Earth too, helping with healthcare or disaster relief situations.

KitGuru Says: This does sound like a great plan that makes a lot of sense. But if science fiction has told us anything, either the suits will use that robot to bully the astronauts, or it will go rogue and set up its own robot city on Mars.