We have known for a while that HTC is taking virtual reality in a different direction to Oculus. While the Rift is focussing on the ‘seated' VR experience, HTC is all about room-scale VR and now the Vive's user manual has shown off how much space you will need to get the full experience, with the motion sensors all set up to map out a space for you to freely move around in.

HTC recently put its Vive Pre headset manual online, which explains that users will need to clear a 1.5 by 2-meter area as a minimum, with the two room sensors placed up high in opposite corners of the room angled down towards the play space at 30-45 degrees. 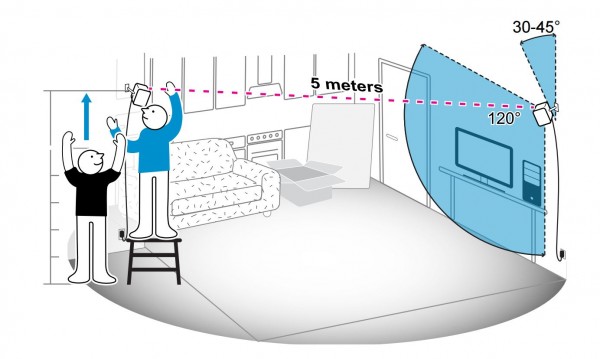 The HTC Vive comes with a five-meter long cable and the manual recommends that users place their PC outside of the area you will be playing in. Pets and furniture should also be cleared from the area, which is all for safety, after all, you don't want to be walking around a virtual world and then start bumping into things on the floor.

Additionally, the two sensors that track player movement need to be placed within five meters of each other. Finally, reflective surfaces will need to be covered as well as windows or any direct sources of sunlight.

KitGuru Says: While a lot of people are looking forward to the HTC Vive, these are things that should be kept in mind. While there will probably be games that work fine sitting down, HTC is putting a lot of focus into its room-scale technology, so users will need to clear some space for the full experience.