MegaBots Inc is back again with a new Kickstarter campaign to build a giant fighting robot, following its previously unsuccessful attempt. Last year, MegaBots asked the internet for $1.8 million to construct a team of 15 feet tall robots, which would be piloted by humans and fight in an arena for public entertainment.

Since then, the company has reigned things in a bit and is launching a slightly less ambitious campaign. Rather than aiming to build a team of robots, an arena and set up a tournament, MegaBots has instead challenged Japan to a single robot battle and is seeking Kickstarter funds to build Team USA’s mech. 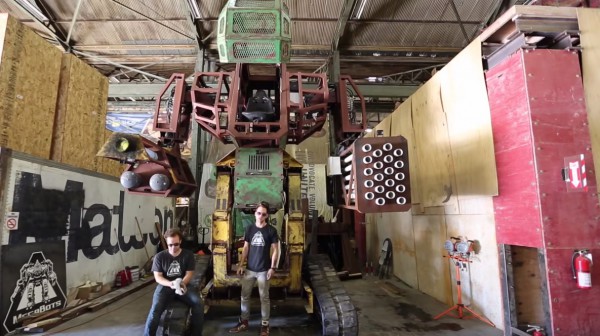 The Kickstarter campaign video shows off MegaBots’ current prototype, the Mk-II, a 12,000 pound, 15-foot tall, fully pilot-able mech but it needs some upgrades before it takes on Japan. Apparently the basic upgrades will cost $500,000, which is the campaign’s base goal, though it has stretch goals all the way up to $1.5 million. Right now, after around 24 hours, the campaign has raised just shy of $200,000.

For that initial $500,000, the MK-II robot will be upgraded for melee combat and new track base equipment to allow it to move faster. At $750,000 the robot will also have ranged weapon options, at $1 million the MK-II will be getting proper legs.

The one that sticks out like a sore thumb is the $1.25 million stretch goal, which says that life safety systems will be incorporated with the help of NASA. Now this is new territory for the entertainment world, but I’m pretty sure that in order to put a human inside of a giant robot and have it fight another giant robot, you would need some pretty serious safety precautions, regardless of how much this Kickstarter makes.

The final stretch goal comes in at $1.5 million and promises a Hollywood paint job to get the MK-II looking as good as possible before it starts getting pounded by Japan’s own robot. As with any Kickstarter campaign, there are plenty of stretch goals, which you can see, HERE.

KitGuru Says: MegaBots’ original Kickstarter from last year was far too ambitious but it seems this time, it has managed to reign things in a bit and is now getting quite a bit of support because of it. In just one day, the campaign is almost half way to its base goal, though I do wonder how feasible a giant robot fight actually is, especially with human pilots.