Lenovo is launching its own HDMI PC stick

Some time ago, Google launched the Chromecast, a little HDMI dongle that brought smart functionality to TVs. Since then, both Qualcomm and Intel have come up with their own HDMI dongles designed to allow users to do basic PC tasks without the need for a full on desktop machine or a laptop.

Now, Lenovo is throwing its hat in to the ring with an HDMI compute stick of its own. Lenovo’s HDMI dongle will be called the ‘ideacentre Stick 300’ and is designed to turn any display in to a fully functional PC with web browsing, video calls, media viewing or basic office tasks. 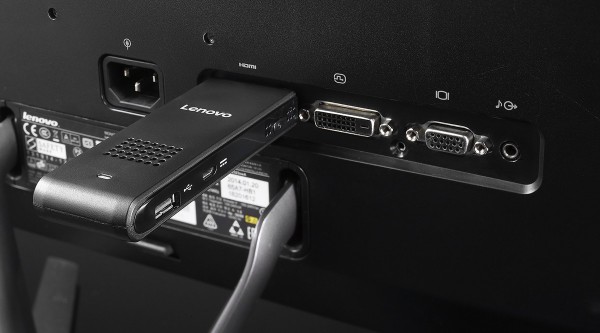 The compute stick comes with Microsoft’s Windows 8.1 installed, although Windows 10 will be an option after the 29th of July. Under the hood, the HDMI dongle comes equipped with an Intel Atom CPU, 2GB of RAM and 32GB of flash storage on-board.

While Intel’s compute stick retails at $150 in the US, Lenovo is offering its own for $130 instead. On the side of the dongle are some inputs, including a USB port, a micro USB port and a full sized SD Card reader.

KitGuru Says: These compute sticks could end up being pretty good for offices, especially if you don’t require a lot of power. Do any of you have experience with these new HDMI dongles? The Chromecast always caught my eye.