Mantle is making its way to three more EA titles

AMD’s Mantle API had its début last year, promising performance boosts for AMD users in Battlefield 4 and Thief. Since then, Mantle has slowly been working its way in to more titles and now EA has announced that it will incorporate the API in three of its upcoming games.

The latest additions to the Mantle portfolio are Dragon Age Inquisition, Battlefield Hardline and Plants VS Zombies Garden Warfare, bringing the total number of Mantle supported games up to 8. Direct X 12 won’t be released until late next year so AMD still has some time to convince developers to get on board. 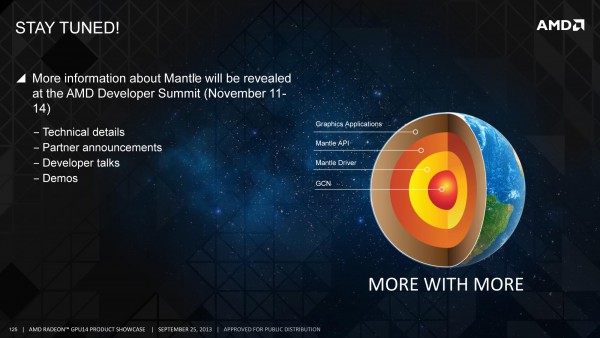 AMD is working its API in to several genres of games to demonstrate how it can impact each one. Mantle has been announced for Civilisation Beyond Earth, which is an RTS game but it has also been incorporated in to open world titles like Thief and shooters like Battlefield.

AMD has also revealed that Mantle will be supported in the latest version of CryEngine, however, no specific titles have been announced yet but given how demanding that engine can be, incorporating the API could improve performance for lower end machines.

KitGuru Says: Not everyone has been impressed by Mantle so far but the main thing to remember is that it mostly alleviates CPU bottlenecking, which means if you already have a high end GPU and CPU then your performance gains aren’t going to be high. Have you guys used Mantle in the games that support it?