Sony has developed a watch made out of e-paper

Sony has developed a new watch made entirely out of e-paper, allowing the band and watch face to change in response to a user's wrist gestures. The device is called the FES Watch and has been worked on at Sony's Fashion Entertainments start-up division, according to The Wall Street Journal.

The FES division has been tasked with experimenting with concepts that could help Sony stand out in the personal device market. The FES watch is very thin and even though it could technically be referred to as a smart watch, the company is refraining from doing so for the time being. Instead, the main focus of the product is its flexibility and minimalist design, rather than features. 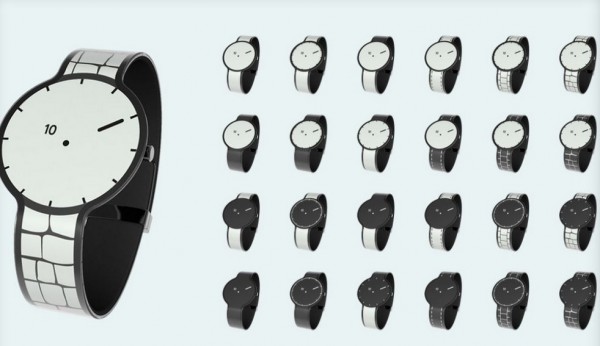 The watch doesn't contain any sophisticated electronic parts and should be able to last as long as 60 days on a single battery. The company isn't stopping at e-paper watches though, it is also looking in to hats, bow ties and other accessories. There is no release date set although those who supported the crowd funding campaign on Japanese site, Makuake, will receive their units after May next year.

KitGuru Says: Electronic paper watches, bow ties and hats seem to be Sony's vision of the future. What do you guys think about this? Will e-paper devices take off?