SD cards are always fascinating. With every year that goes by they somehow manage to cram more space into the same form factor, at an affordable price too. The SD Association is taking that one step further with their new SD Ultra Capacity cards, with a storage limit of 128TB.

On the 26th of June, The SD Association announced SDUC and SD Express. SDUC will push the maximum storage capacity in SD cards from a measly 2TB up to 128TB. SD Express is based more on improving the speed of SD cards, and the SD Association has really gone all out for this new specification.  SD Express will add PCI Express and NVMe to the regular SD card interface, with the PCIe interface delivering 985 MB/s data transfer rates. 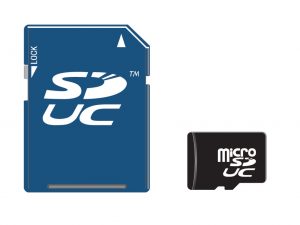 Both new standards will be added to the new SD 7.0 specification and are backwards compatible, just like every other SD Card.

KitGuru Says: Whilst SDUC is amazing, SD Express is improving on one of the biggest downsides of SD Cards, the performance, and that makes it a lot more exciting than more storage. What do you make of these new SD standards?