Although KitGuru is first and foremost a tech-focused publication, copyright is something that has impacted a generation of web users more than any other before it, so the way it operates is surprisingly relevant to a bunch of people playing games and overclocking their CPUs. In this instance however it's a little different than the piracy related stories we're used to: the Anne Frank Foundation is playing with copyright to maintain control of the girl's famous diary.

Anne Frank, a Jewish victim of the Nazi Holocaust during the 1940s, has over time become one of the more important diarists of World War II, with her perspective offering a uniquely personal tale of a war that is often clouded in numbers and statistics. Due to her dying in early 1945, her diary is set to lose its copyright protection at the end of this year; officially, on the 1st January 2016. That would mean its ownership would pass into the public domain, but it seems that the current owner of its copyright, the Ann Frank Foundation, is making moves to stop that from happening. 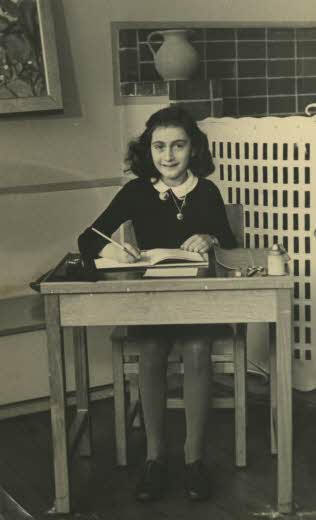 This photo could only be used in this piece because it's in the public domain. Source: Unknown photographer.

While the Foundation does great work for children's charities and WWII veterans, it now appears to be taking part in the revision of history in an attempt to maintain its copyright hold for a few years more. Just weeks out from its end as steward of Frank's work, it's claimed that Anne's Father, Otto, was also a co-author of the diary, which would extend its ownership of the copyright until 2030.

Boing also reports that an editor of one edition of the diary is also claiming co-authorship, which would push the copyright back into the late 21st century before it entered the public domain.

This is, according to some analysts, fraudulent and perpetuates a copyright that while certainly useful under the Foundation's control, could also allow for collaborative works based on Frank's work if set free. As a part of history too, many argue that the diary should be owned by the public, much as other historically important documents and artefacts are.

Perhaps most damning though, is the accusation that by claiming others are co-authors of the diary, it suggests that it does not entirely represent Anne's views on her time in that cramped attic. To a lot of people, that's very disrespectful of her memory.

KitGuru Says: This is one of those difficult cases where although the foundation does a lot of good, it shouldn't be allowed to exploit copyright law for its own ends.