Home / Channel / Canada has been spying on everyone too

Canada has been spying on everyone too

Oh Canada. So often forgotten during the Edward Snowden leaks. With all the attention on the likes of the US and UK for tapping into undersea cables and New Zealand for going after Kim Dotcom's file locker services, it's easy to forget that Canada, like the aforementioned nations and Australia, are all pat of the “Five Eyes,” spying network. They help each other out. So it's no real surprise that new information has come to light that shows the North American nation was just as active as the rest of them, analysing some 15 million downloads and uploads of popular sites every day, just in-case one of those doing it is a terrorist.

The documents revealing this information come Edward Snowden, via CBC News and The Intercept, and detail the scheme known as Levitation, that is able to monitor uploads and downloads from certain websites in any number of countries, including most of Europe, certain parts of Africa and the Middle East. 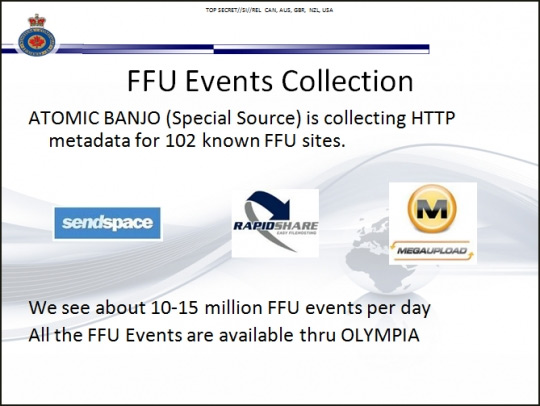 Some of the filelocker sites tracked don't exist anymore

“Every single thing that you do – in this case uploading/downloading files to these sites – that act is being archived, collected and analysed,” said Ron Deibert, head of Toronto based think-tank, Citizen Lab.

Ostensibly, the idea behind the scheme is to sift through all of the files people are downloading, hoping that someone will look at something like a bomb making guide or something else potentially terrorism related. At that point, that individual can be investigated further, though the Canadian intelligence agency, the CSE, did joke in the released documents that it would probably mean sorting through a lot of episodes of TV series Glee.

Of all those millions of downloads monitored every day, only around 350 are worth further investigation every month. Considering how ineffective the NSA's own efforts were in a similar regard, managing to potentially stop one terrorist attack after years of surveillance, it's easy to speculate that out of those 350, very few, if any are related to legitimate terrorist threats.

While only being released now, these slides date back to 2012, so it's not clear whether this scheme is still operating in the same way today.

tiGuru Says: Such a bizarre drag-net tactic. Surely there are more effective ways to track down terrorism?