Dead Rising: Watchtower, is an upcoming live-action movie starring everyone's favourite secondary character actor, Rob Riggle, of 21 Jump Street and The Other Guys fame. He'll be playing the infamous photographer and zombie slayer, Frank West. Set to debut on Sony Pictures' Crackle streaming service, we now know that the movie will be available as of 27th March.

GameInformer has it that the film while initially exclusive to Sony's platform and will soon after be made available on other digital platforms and in physical form for those that want to go old school and actually own their media. Interestingly however, some services will apparently be streaming the film in an episodic format, rather than as a feature length production. 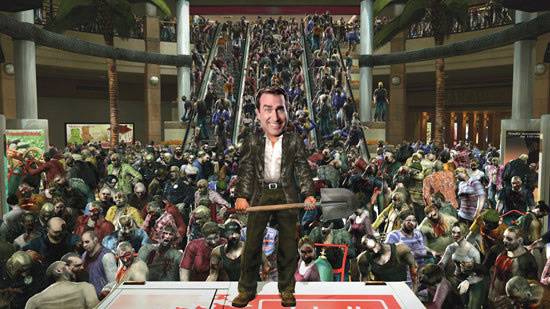 I know, my Photoshop skills are the best

Directed by special effects worker Zach Lipovsky – who also directed the recent Leprechaun: Origins – the film also stars Meghan Ory, Virginia Madsen, Keegan Connor Tracy, Dennis Haysbert and Jesse Matcalfe, most of whom I had to look up to pen this piece.

Still, the movie is being written by the guy behind the Sleeping Dogs video game, so hopefully it will retain some elements of the original hit zombie slasher.

KitGuru Says: I would have loved this a few years ago, but save for the Walking Dead comics, I feel like I'm done with zombies at this point. They just feel very played out.