Everything we were worried about with the TPP was true

The Trans Pacific Partnership is the other side of the world's TTIP. It's a piece of legislation masquerading as a trade deal, which for a long time, leaked drafts of have scared privacy campaigners, doctors, tech companies, nationalists and just about every internet user who can wrap their head around it. Now that we've got our look at the final draft, it's as bad as everyone expected and is closer than ever to being signed in.

As if aware of its own grandiose potential, the TPP document is thousands of pages long, spanning more than 30 chapters of wording that makes it hard to see the forest for the trees. But we can see some of it, because after experts in various fields have trawled through it – and they're still doing so as we speak – they've discovered that many of the worst provisions of the TPP that raised concerns over the past few years, are more enshrined than ever. 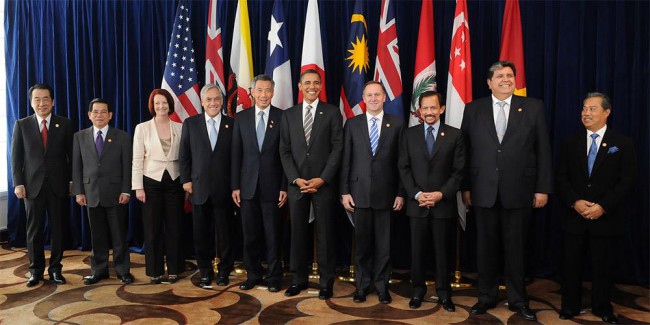 Most of these guys have been pushing for TPP for half a decade. Source: Wikimedia

While there are many aspects of the TPP that have caused concern among campaigners, perhaps the most worrying portion relates to the ability for corporations to sue governments over lost profits. If a law is passed that impacts a company's ability to do business, it can take that government to court. This has already happened in Australia, where tobacco firm Philip Morris sued the government in 2011 over the introduction of plain cigarette packaging, and in El Salvador, where the government banned mining to help protect local water sources; a mining corporation sued it for lost profits too.

Worse yet, any arguments about it will be mandated to take place within a secretive IP court, not given the same oversight as traditional legal proceedings (as per DailyDot).

Other causes for concern with the TPP includes an extension of corporate copyright, which would see it go from 50 years in some nations, to 70 years, meaning corporations could sue for unauthorised use of properties from the 1940s. ISPs will have more of a role in tracking and policing any piracy their customers take part in too, with those considered to be copyright infringers also sued within the secretive court system outlined above.
[yframe url='http://www.youtube.com/watch?v=p3KlrfjcjV4′]

DRM would be enforced beyond video games too. TPP would make it so that the use of any product outside its originally intended use, could well land you in legal trouble. In one example, it would be entirely illegal to perform actions in your John Deere tractor not recommended by the manufacturer.

While politicians like President Obama have touted TPP as a way to improve relations and trade between countries, much like Bill Clinton's signed in North American Trade Agreement, TPP puts the whims of corporations over that of the public. Indeed the companies that stand to benefit the most have been privy to the trade deal talks, whilst the general public and press have had to rely on leaked documents from years past.

KitGuru Says: Fortunately, as potentially dangerous as the TPP is, it still needs to be voted in by member countries. While it has now been finalised, it will still need the approval of Congress and the Senate in the U.S., and the same sort of representatives in other affected countries. Considering it's gotten this far though, expect it to receive a big push from those who have hauled it uphill so far.