How many times have you felt a little ridiculous after hitting that like or share button next to a story that seemed too good to be true, or too awful not to be? I think we’ve all done it. There’s a reason sites like Cracked do well talking about all the fake stories that appeared in our news feeds over the preceding week. However, Facebook is looking to halt some of these over the top headlines from becoming mainstream news, by having sites that exist to push this sort of content – like The Onion – add a “[Satire]” tag to their stories.

This is being trial run right now, but has already begun to appear on some people’s feeds. Sam Machkovech over at Ars managed to grab a screenshot of it in action, highlighting a bunch of Onion stories and making sure that you know exactly what you’re getting in for. 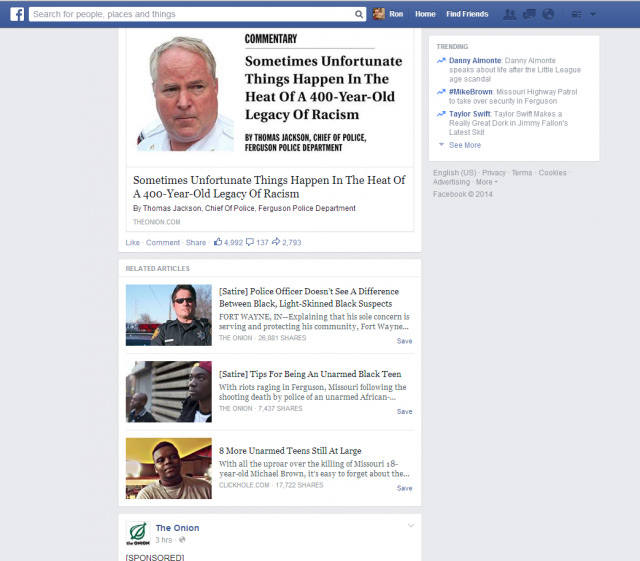 Facebook later released a statement discussing the trial, stating that it had been running for around a month and would only appear in the “related articles,” section of a Facebook post. However, it did explain that it was in response to people requesting a way to differentiate faux-news, from real news.

Of course the “problem,” with content like that produced by the Onion isn’t that the stories themselves seem legitimate in the first place, it’s that they’re often shared as such, so the satire tag is unlikely to do much to help that fact.

KitGuru Says: While I can see why Facebook is thinking of implementing something like this, it seems like all it’s encouraging is people not thinking about what they’re reading. A second of thought over any Onion article will give your brain a chance to realise that it’s probably nonsense and as soon as you learn what The Onion is, it’s easy enough to avoid making yourself look like an ass.
What do you guys think? Is saving people from feeling silly Facebook’s job?