If you’ve ever been about to purchase something on an illicit market, but were wondering how much of a single bitcoin you’ll need in order to cover your order, then often times that meant going to a site like Blockchain, or one of the big exchanges and checking their latest statistics. Well no longer, as Google has now expanded its currency conversion tool to include bitcoin as well.

Visiting Google right now and typing in something to the effect of, X bitcoin in GBP, will give you X’s value in British pounds. You can do it in the other direction too, or into different currencies, it’s pretty versatile.

It can be important to keep on top of bitcoin pricing too, since it has a history of volatility. While it’s remained relatively constant over the past few months, hovering around the $600 mark, in the past it’s spiked as high as $1,200 per coin. 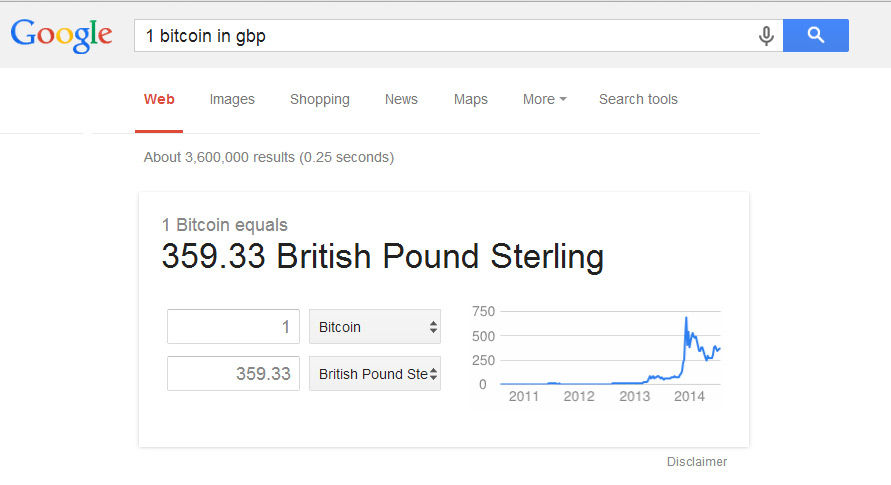 However Google is quite late to the party on this one. As Forbes points out, Bing and Yahoo both beat Google to the punch, releasing their bitcoin conversion tools in February and June respectively. It’s worth remembering though that it might be worth visiting a couple of them (or even using the exchange sites themselves) to check the latest pricing, as they can differ depending on where the statistics are drawn from. For reference, Google’s new system gets its information from Coinbase.

KitGuru Says: Bitcoin is seeing growing acceptance at a multitude of websites and with many mainstream companies. It may not be as popular an online payment platform as sites like Paypal, but it has the potential to one day be, once the infrastructure is there.

Previous Microsoft set to cut 18,000 jobs by March 31st 2015
Next Intel: We will integrate 3G/4G modems into all our platforms