Administrators and moderators of the original KickassTorrents file sharing website have helped bring about its resurrection. Without access to the original database and code, they had to start from scratch, but the end result is a site that looks and feels very much like the KAT of old.

KickassTorrents was, following the downing of the Pirate Bay in 2012, the largest torrent site in the world. It provided links to thousands upon thousands of legal and copyright protected material and had a strong user community around it. However in July this year, its owners were arrested and the site shut down by law enforcement.

With those in charge facing stiff penalties for facilitating copyright infringement through the site, the original administrators and moderators looked to rebuild the community that had been built around the original KAT website. That was achieved several months ago, but still left everyone hankering for the KAT of old. While they haven't quite managed that yet – the new site is slow to load and lacks a lot of functionality – the newly created KickassTorrents is the closest anyone has managed yet. 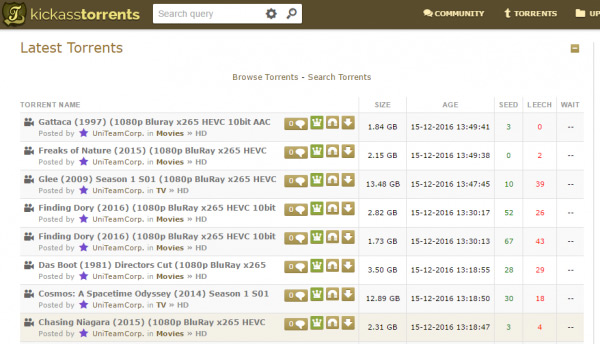 As TorrentFreak points out, perhaps the biggest compliment the new site could have received, is that many of the biggest uploaders from its heyday have returned, which lends a lot of credibility to what is in essence, a new and untested torrent site.

Something that may help it remain online in the future too, is that the developers have implemented a DMCA takedown system, so that copyright holders can have their files removed from the site if they want. KAT staff also double down on this by stating that it does not host any files and acts merely as a forum and search tool.

While that hasn't protected other site operators in the past, it may well help KAT from being targeted too swiftly or heavily by police agencies around the world.

KitGuru Says: We haven't linked to the new site, but if you really want to find it I'm sure you guys will figure it out. Be careful though, there are lots of scammers out there.