In case you’ve been living under a virtual rock for the past 48 hours, you couldn’t have failed to miss the news that Facebook bought out Oculus VR, makers of the Rift headset. While this saddened, angered and confused many, as people calm down, they’re starting to realise this might just be the best case scenario for everyone.

However one of the people that took his ball and went home when the news broke, was Minecraft creator Markus “Notch” Persson, who said that while his company was developing a Rift enabled version of the blocky builder, he’d now cancelled it because of the Facebook deal. He also posted a long (and admittedly jet lagged) break down of his thoughts on the matter, which further cemented his position that because of Facebook involvement and the probable push for social Rift usage, he would steer clear of it.

A lot of people initially jumped on this as a great example of the world of developers rallying with angry fans over the news, heralding an end to Oculus dominance in the VR game, but as time has passed, it’s looking more and more like Notch threw his toys out of the pram. Palmer Luckey, founder of Oculus VR countered Notch’s points and even took a gentle swipe back at the Minecraft maker: 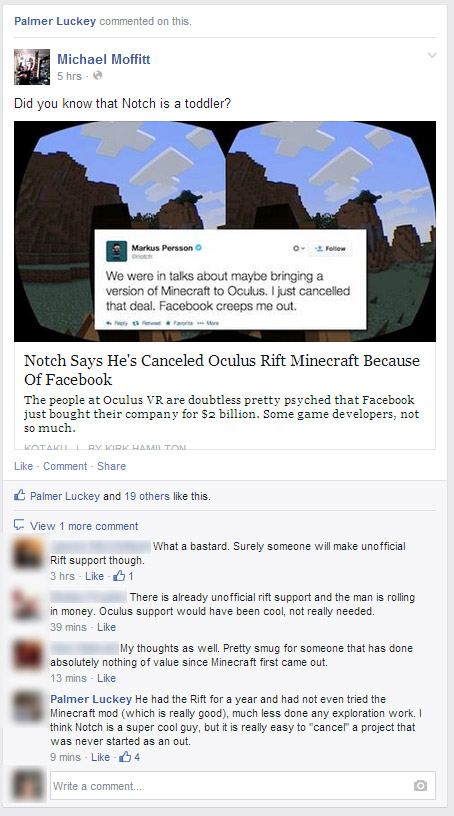 “[Notch] had the Rift for a year and had not even tried the Minecraft mod (which is really good), much less done any exploration work,” said Luckey in response to a Facebook post on Persson’s comments. “I think Notch is a super cool guy, but it is really easy to “cancel” a project that was never started as an out.”

Oculus defenders have also used the opportunity to point out that while Minecraft was a mammoth success, Persson hasn’t been involved in its continued development in a long time and while he’s announced other projects, Scrolls is the only one to make it to beta.

Epic Games alumni Cliff Blezinski also threw in his two cents on the whole “Riftbook” scandal, taking particular note of Notch’s comments towards the end of his post.

“Notch, your cancelling Minecraft makes you look like a pouty kid who is taking his ball and going home. It’s a bratty and petty move and it saddens me greatly,” he said.

Persson has since made a couple of extra comments via Twitter, some explaining away his initial reaction, others seemingly poking at Oculus some more for accepting the buy out:

“Only people with strong opinions express them, causing distorted discussions. If [sic] don’t care one way or the other, say so! (hm, maybe not..),” he said yesterday afternoon. This was followed up by:

“I am very aware that I sometimes react emotionally and not “professionally”. This is one of the benefits of having no external owners,” and “Mojang exists because it’s fun to make games, not to only have the maximum profit.”

KitGuru Says: While Mojang’s business model was revolutionary, it still made Notch a very rich man. He may not be doing it all for profit, but he has enjoyed the money his one big game made. Just look at his company office.

[Thanks to Redditors: Blue Penguin, Radnemos]