The Sunday Times is continuing to paint itself as a propagandist for the British government, after a response to further complaints against its recent exposé, which claimed that British and US spies’ lives were put at risk thanks to Edward Snowden’s released documents. In a correspondence with a reader, the newspaper’s editor, Martin Ivens stated that if they had any problems with the article, they should “address [their] remarks to 10 Downing St.”

“If you think they have lied to us, then so be it,” he said (via TechDirt), closing out the short statement. This is further admission that the Times did in no way double check the statements made by the government and instead published them as fact. It’s also worrisome that Ivens appears unconcerned that his publication made a mistake with its story. A redaction wouldn’t be a bad plan, but at the very least a re-investigation into the claims and further reporting could be considered. 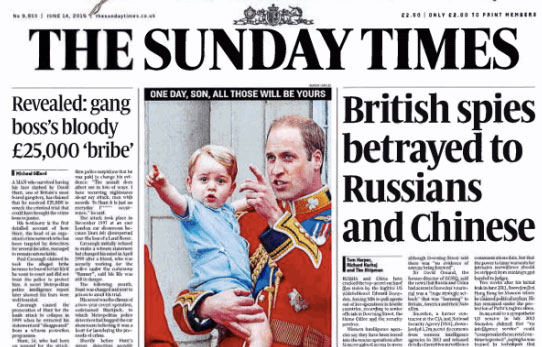 Patriotism and some buzzwords for good measure. Where’s the red top?

This lack of pandering to organisations and governments is especially relevant at the moment, considering KitGuru’s own issues arising from publishing what we think is right, versus what is wished of us. While it’s understandable that the Sunday Times would want to run with a story, even potentially without checking to see if others corroborated the story, it has to publish with a pinch of salt. If something comes from a source with a potential for bias, that needs to be mentioned too.

Nobody expects anybody, especially in the fast paced and cut throat game of news, to be 100 per cent correct all of the time, but putting the onus of truth on the government suggests an agenda driven publication, rather than one that is beholden to its readers. It shows a disinterest in the story and more so in the buzz it will generate.

KitGuru Says: Here at KitGuru, we would never pretend to be infallible and have made mistakes in the past. However we never deliberately mislead, will always go back and correct any falsehoods and we will above all, put our readers first before anyone else.

Previous Disney looking to virtual reality for expanded Infinity universe
Next Is someone going to buy Twitter?