Home / Channel / Would you buy goods through a Tweet?

This is the question Twitter is hoping you’ll answer “yes,” to in the coming months, as it plans to try and monetise its service to a much greater extent, by setting up an e-commerce platform within the Twitter experience, giving you the option to buy products talked about through tweets.

This isn’t something that’s been officially announced by the social network, but it looks very likely considering the screenshots the guys over at Re/code have discovered: 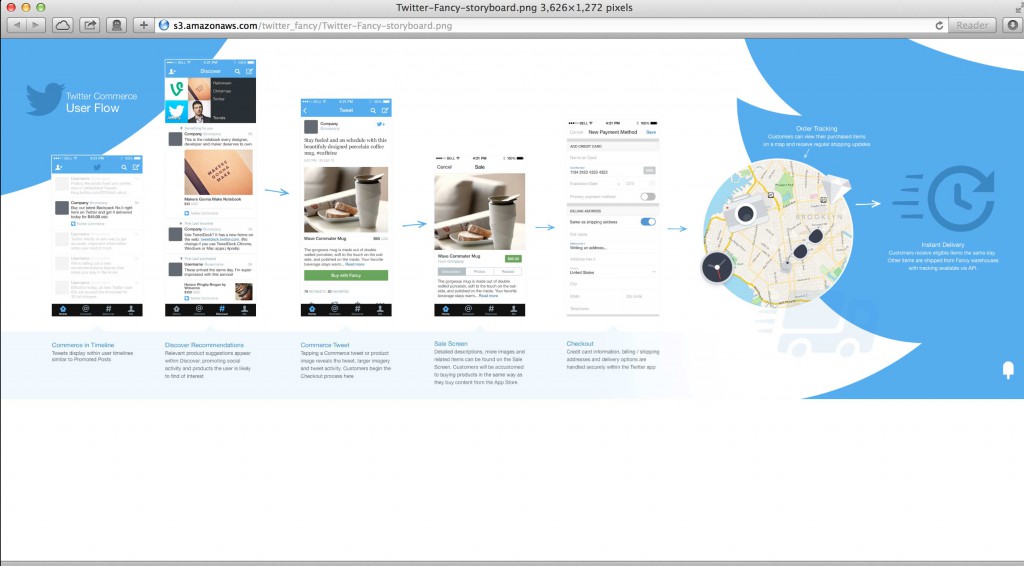 The page was discovered as a part of Fancy.com, a company that already handles E-commerce in a manner that’s got a social networking feel to it, with a dominance of imagery, rather than catalogue like layouts more traditional online stores use. This would work well with Twitter – as the screenshots show- because it would simply mean when someone talks about a specific product, they could have a link added beneath the Tweet that lets people buy the item. Perhaps it would work in a manner similar to Youtube’s advertising system, where the tweeters received a portion of the money raised by the click/sale of the link and/or product.

Promoted tweets would also no doubt be used in a similar fashion to how they are now, but to promote direct product sales rather than just links to new content, or twitter accounts.

This is all designed to help turn around the fortunes of the site, which despite having one of the largest user bases online and becoming a tool for social change, new forms of interaction and of course, spam, Twitter is haemorrhaging money, losing over $160 million last year.

KitGuru Says: However Twitter decides to handle this though, it’ll need to be careful that it doesn’t get overzealous or it could quite quickly have users the world over adding affiliate links and ads to their tweets to try and make a buck and suddenly you have a massively diluted service that’s clogged with nonsense ads. It’s killed sites before, it’ll do it again, even something as influential as Twitter.

Here’s hoping however this is put together, it’s done with care – and judging by Twitter’s current finances, done soon.