Even though the past few years have seen some amazing space endeavours and science recovery from traditional space-faring organisations like NASA and the ESA, some of the most exciting developments as of late have come from commercial ventures like Space X and Virgin Galactic. However that time has also seen the birth and growth of online crowd funding, which is why it’s extra exciting to learn that Bill “The Science Guy,” Nye and his solar sail satellite project have been successfully funded in just a few days and the campaign looks set to go to the moon and beyond, with stretch goals a plenty to break through. 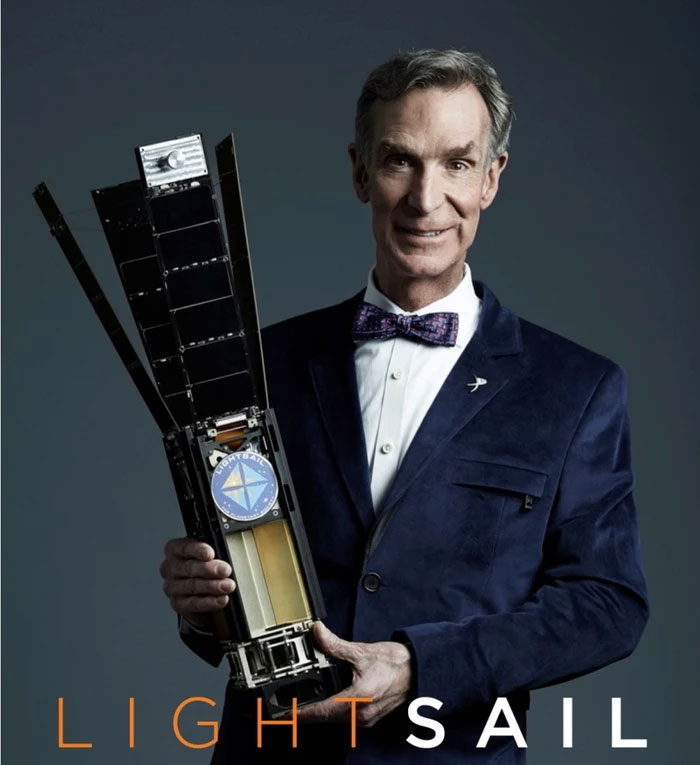 How could you not give money to this guy?

The project, called Lightsail, is headed by the Planetary Society (an organisation that Nye is the CEO of and has Neil Tyson on the board) that democratises space, by giving every member a vote in what projects it works on. As it stands, it’s developing a solar sail equipped cube sat, which is a miniature satellite equipped with giant mylar sheets, which use the infinitesimally small ‘push’ that light gives to reflective surfaces, to propel a space craft through the inky blackness of the solar system.

As Mr Nye points out in the campaign video, this is possible because while photos have no mass, they do have momentum, which is enough to provide a small amount of impetus on a consistent basis. This should allow the little space craft to – over time – reach very high speeds with almost no fuel usage. That makes the launch and maintenance of the craft much cheaper, which is why it can be crowd funded.

Set to launch atop the first Falcon Heavy booster from Space X in 2016, the Cubesat system is now fully funded, but there are more than 40 days to go in the campaign, so it’s likely to achieve a few stretch goals before then. The first one, which is just $17,000 away would mean more testing from other research institutes. A total of $450,000 would pay for the tracking and management of the satellite for up to four months after its launch, while $550,000 would see the publication of several scientific studies about the project in appropriate journals.

However, this is all peanuts compared to what the campaign may reach. Thanks to its explosive success already, it’s on “traq” to hit over $4.5 million, which would destroy its final $1 million reward tier, which will launch a public awareness campaign about cubesats and solar sailing. What else they can offer remains to be seen.

KitGuru says: What would you guys like them to do with all of that extra money the campaign is likely to earn?