If you thought the video of the MIT Cheetah robot, that can run faster than the world’s quickest human sprinters was creepy, take a peek at the new video from Google (soon to be Alphabet) owned Boston Dynamics, which has a six foot tall bipedal robot named Atlas, running through the woods. Cue the psycho theme, it’s coming to get us. 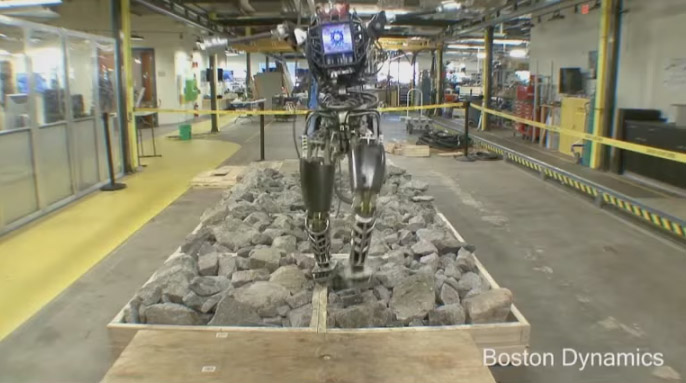 The footage is initially impressive, because it showcases how good Atlas is at balancing. It’s able to withstand being struck from the side, walking over rugged terrain and readjusting itself it it starts to lose its balance. While it might require a giant power-cable to keep it operating, its autonomy is impressive, leading up to the final shot of the video where it’s speed-walking through the woods.

If this was shot at night, it would be terrifying.

This video came out of a robotics conference held earlier this month, where researchers from MIT, Kiva Systems, DARPA and Harvard University all showed off what they were working on. It includes crowd aware robots, that can adjust depending on what their fellow bots are doing, robots that can open doors and discussions of the future of robotics.

One suggestion was to create robots that could aid in disaster recovery. In the wake of an explosion, nuclear disaster or other hazardous environment, robots could be sent in first to recover survivors or contain any dangerous problems. A full video of the conference can be viewed below:

KitGuru Says: While some of the robots from science fiction are still a ways off from being created, we’re not a hundred years from useful bots. It’s more like a couple of decades. Who else is excited?