If there was one joke that often gets brought up about many dinosaurs, it’s that if they had arms, they were often short. Not all of them though, and one dinosaur in particular with exceptionally long arms for its kind has been puzzling palaeontologists for decades, but no longer.

Deinocheirus mirificus was discovered, way back in 1965, when a pair of giant arms (each around eight feet long), claws and a few vertebrae were discovered in the Gobi desert. It earned its name a few years later, which literally means, terrible hand, but until recently it was still all speculation on what the original owner of the arms looked like and what sort of dinosaur it was. 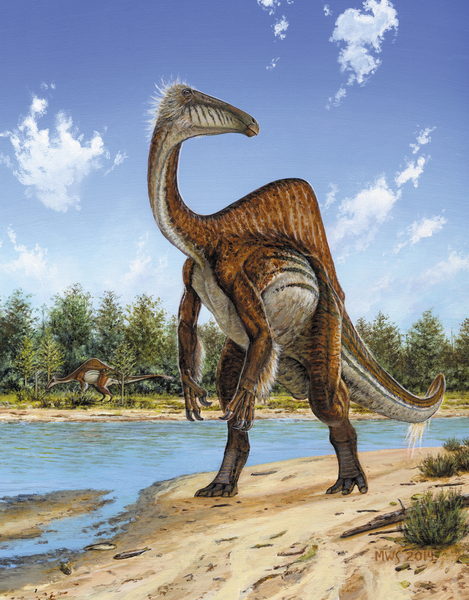 Now however, thanks to palaeontologists revealing details about two other specimens of Deinocheirus mirificus found in Mongolia in 2006 and 2009, we have a near complete skeleton and researchers have begun to take some much more educated guesses about this particular dinosaur’s make up.

The larger and smallest skeletons were the ones most recently discovered.

In a study published in Nature, Deinocheirus was profiled as the largest of all Ornithomimosauria, or ostrich like dinosaurs, that walked on two feet. However even beyond its size, this dinosaur possessed some unique traits among this group of theropods. It had a deep jaw and tall spines along its back and a pygostyle (where the final few vertebrae are fused for strength and stability). It also had a much longer than expected snout, but much shorter hind limbs than dinosaurs of a similar type.

Diet wise, Deinocheirus is categorised as a mega-omnivore, putting it into a similar category of animals as bears, eating plant material and fish mostly. This dinosaur was a little larger than the average bear, reaching upwards of 11 metres from nose to tail and would have weighed in at around six tonnes.

But what about those giant arms? It’s now thought that they were mostly used for digging for plants and gathering underwater veegetation for consumption.

KitGuru Says: This just gets me that little bit more pumped for Jurassic World next year. I really hope it doesn’t suck.