NASA announces discovery of most Earth-like planet yet

The search for a planet that is as Earth-like as possible is an important one. Not only could it one day prove to be a second home for humanity when we stretch our influence outside of the confines of this solar system, but it could also potentially be a place to find life as we know it. So it's with great fan-fare that NASA has announced that its Kepler mission has discovered a planet that closely resembles our own home world: Kepler 452-B.

The catchily named planet is located in the Kepler 452 system, around 1400 light years from Earth, so we won't be visiting any time soon. However, we have learned a lot about it and what we know already is very exciting. The planet orbits a G2-type star, similar to our own sun and is located within the ‘habitable zone‘ which means liquid water can exist on the surface. 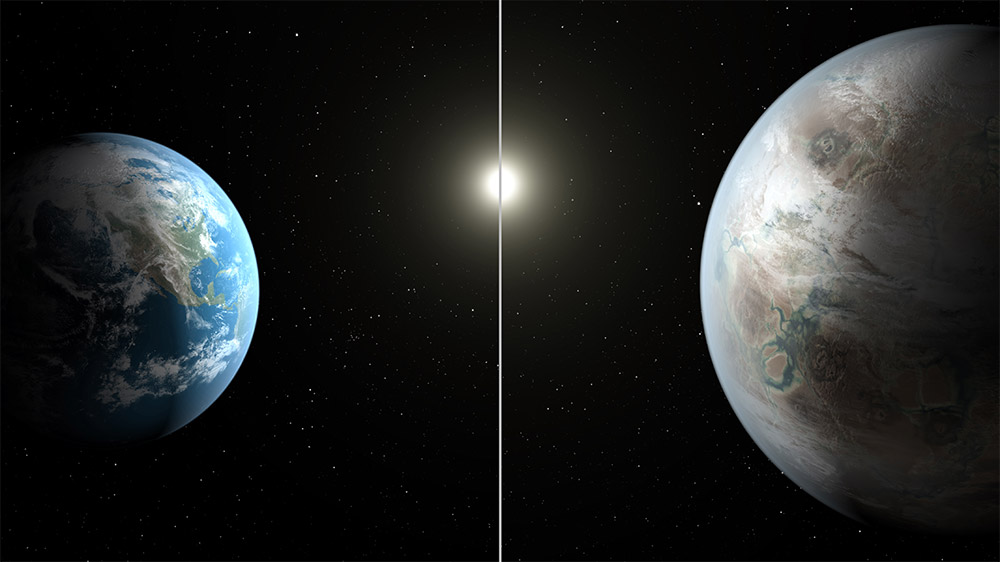 An artist's interpretation of Earth and 452-B in an epic face off. Source: NASA/JPL-Caltech/T. Pyle

That is one of the key components of life, but there are others to consider too. 452-B is a similar size to the Earth – around 60 per cent larger in diameter. That means that its gravity likely won't be so crushing as to prevent life from forming. We don't know the planet's mass as of yet, but we do know that its orbit around the Kepler system's star is only five per cent longer than our own 365 day trip around the sun.

“We can think of Kepler-452b as an older, bigger cousin to Earth, providing an opportunity to understand and reflect upon Earth’s evolving environment,” said Jon Jenkins, Kepler data analysis lead at NASA's Ames Research Center in Moffett Field, California (via NASA).

The Kepler 452 system is about six billion years old, or 1.5 billion more than our own solar system. That means that 452-B is also likely older than Earth, meaning it will have had more time to generate life if indeed it has the correct conditions to do so. However the suggestion that it is a rocky planet and could house active volcanoes is further evidence that makes it a prime candidate for such a world.

In the near future, scientists hope to perform atmospheric tests to find out just what components make up the air on 452-B.

KitGuru Says: Exciting stuff. Now we just need to hold out hope that nothing goes wrong with the James Webb Space Telescope, as it should give us even better views of such planets when it's launched (hopefully) in 2018.